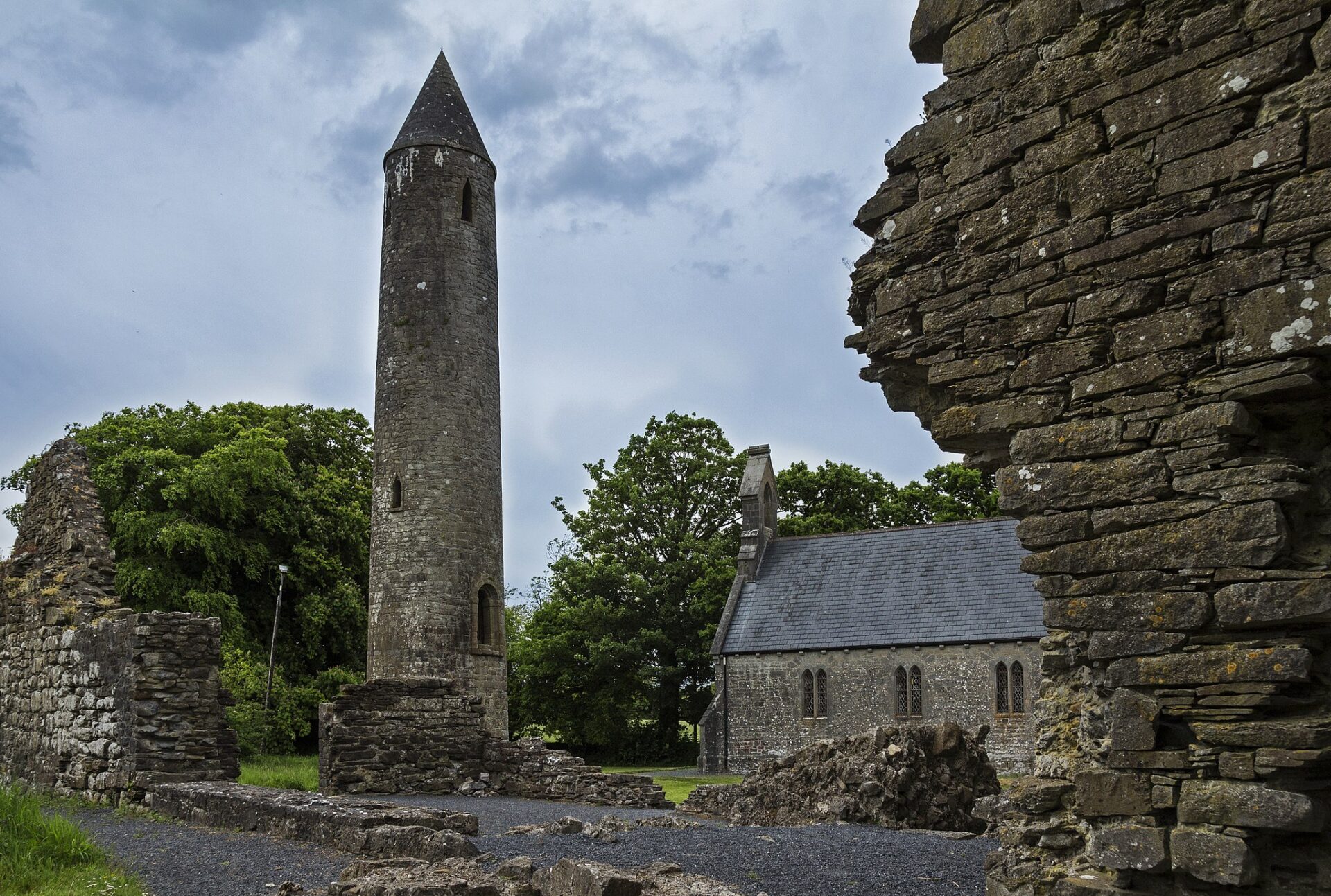 One of the many treasures safeguarded in Laois Libraries’ Local Studies section is a memoir from Timahoe, a memoir which begins in 1913. The work is entitled Timahoe, as I remember 1914 and the memorialist is Jack Quigley, of Ballygormill, Timahoe.  This is an undated typed document. The present article offers some extracts from the memoir along with explanatory notes and comments. For clarity Jack Quigley’s words are in italics.

An awful lot of Jack Quigley’s reminiscence is concerned with who lived where; the pipe band; the establishment of Mochua’s Hall – the dances that were held there; where dances were held before the opening of the hall; a practical joke; the positive influence exerted by Fr. Kinsella in the 1950s and so on.  It appears that the founding of Mochua’s Hall was the central event in the history of Timahoe in the twentieth century and who’s to say it wasn’t? That said we must bear in mind the memorialist was a child in the 1910s and an adult at the time of the development of the hall. Nonetheless we get a very valuable account, particularly of three episodes in Timahoe in the revolutionary years.  Of course, all of the account, and all of these memories committed to print are very valuable, but these particular episodes are what most dovetails with the focus of this series of articles on Laois in the revolution.  But as it happens in Jack Quigley’s account it was compensation funds for British Army destruction of the pipe band’s equipment that paid for the hall, so it does all link back in to the revolutionary decade. Of the three episodes what is most striking is that two of them concern Republican policing, while the other is a British Army raid for Republican suspects.

“. . .there was a long thatched house. I don’t remember it being occupied. It was owned by Scullys. Around 1918, after the 1st Dail Elections, the I.R.A. or Sinn Fein established a Court and Police system. As we went to school one morning we noticed Jack Byrne walking up and down in front of this house with a black belt like a policemans belt. He was guarding a prisoner arrested the night before for some burglary or something. His name was George Mc Keon, a rather harmless poor fellow. He was reared somewhere in Garryglass and remained around Timahoe all his life. He loved playing football with school kids. Thats the only time I saw that house occupied.”

Jack Quigley’s dates are a little out there, unsurprisingly as he was putting these memories into the record a long time after the events in question – it was more in 1920 that the Dáil Courts and Republican policing got going. The main impetus for this alternative court and police system was the perceived need to deal with the growing movement of agrarian rebellion, which was concentrated in the western counties, but had the potential to spread.[1] However, there was also the goal of supplanting the civil administration of the British state, a practical goal in the drive for independence, but also arguably a practical need as the revolution saw something of a crime wave.[2]

The crime wave was especially a factor in the months in between the Truce of the summer of 1921 and the Civil War which began in the summer of 1922 (while the preponderance of crime itself carried on into, and after, the period of the Civil War, the Free State administration did away with the Dáil Courts by then).  But even before the Truce there was a higher than usual level of what was later cynically known as ‘ordinary decent crime’ or we might say ‘normal crime’.  For instance, The Dead of the Irish Revolution lists eleven fatal casualties due to political violence in Laois. One of them is the death of Michael Byrne farmer and cattle dealer from Coolrain near Mountrath, found dead on the roadside from a shotgun blast on the 14th of April 1921.[3] Byrne often had large sums of money on his person and it was believed that his death occurred during the course of a robbery. While it would be wrong to directly ascribe this death to political violence, it could arguably be ascribed to a crime wave facilitated by the overall environment of conflict including political violence.

However, what Republican police had to deal with in Timahoe was of a much less grave character. As well as the “burglary or something” of the Jack Quigley memoir the only other record of Republican policing in the village I have found is a terse newspaper report of bicycle theft:

“On Saturday a bicyle belonging to a farmer in the district was taken from outside the door of a house in Timahoe, Leix. On Monday the matter was reported to the local Irish Volunteers, who arrested a man on suspicion, and he was tried and found guilty and sentenced to deportation from Leix that evening.”[4]

More seriously a spree of robberies in late December 1922 saw the old-age pensions taken in Timahoe post-office, as well as wages taken in the Mountmellick maltings, and the manager of Stradbally maltings was compelled to go from his residence in Timmins’s hotel to the maltings to handover the cash from the premises.[5]

“. . . on another Sunday morning when we went to the Chapel gates on the way to Mass there were three men from Timahoe tied hands and feet to the Chapel railing. Fr. Fenlon was curate at that time and generally walked down from his house to Mass. He walked up to the three men, said nothing, but turned to a few people standing over from the church gate and asked “Have any of you a penknife?” One said yes. He said, “come here and cut these men free”, which he did. He stood there until the men walked off. They were accused of disobeying orders from I.R.A. officers, it seems, although there was no indication of this evident. Their names were Ned Bradley, Ned Lalor and Jim Kenna. They were decent popular men, and perhaps did not like the orders they got.”

Sure enough an Edward Bradley, an Edward Lalor, and a James Kenna are listed on the military service pension rolls as being in 4th Battalion Timahoe A Company of the Irish Republican Army in July 1921 (there was a Timahoe A Company and a Timahoe B Company as it had become necessary to have a merger with a neighbouring unit).[6] These lists were made in the 1930s of who was remembered by local officers as being in the ranks in July 1921 and July 1922 for the purpose of background research for the adjudication of pension applications.

Being tied-up to church railings was not an infrequent form of punishment in Republican policing. Exactly what orders the men refused is not known. We should not underestimate the extent to which there was dissension within the ranks of the Republican guerrillas, and within the communities from whence they came. Republican policing involved clamp-downs on genuinely popular activities such as poteen making or agrarian protest. Moreover, lots of the military insurgency disrupted the necessitates of day-to-day life, sometimes road blocking for instance proved controversial.

Jack Quigley’s account goes on to recount the events of the evening before the men were found tied to the railings:

“Mrs Scully’s mangold pit was just outside the chapel wall. It was after seven o’clock and she went to get some mangolds and heard men talking and the railing being shaken. She looked out over the wall to see what was going on. When the man in charge which was Frank Dunne saw her, he pointed a revolver at her and told her to get in immediately, which of course she did. A few minutes later Mrs Kerr seeing activity came out to the corner and a shot was fired striking Kerrs wall. Later Denis Dunne came out and all was quiet but another shot was fired up the Swan road.”

To break this down – Dennis Dunne is listed as being in 4th Battalion Timahoe A Company (a James Dunne was a Company officer). Frank Dunne was O/C 4th Battalion, so he was in a higher tier of leadership, at battalion level, over the Timahoe companies and several other companies.[7]  The mangolds were likely to have been fodder beet – a vegetable fed to animals which is related to sugar beet, beetroot and turnips.

Of course, there were more bodies of armed men to be frightened of than just the Volunteers of the Irish Republican Army.  Jack Quigley also preserved the memory of a British Army raid:

“From 1918 four or five Timahoe men were wanted by the British and went on the run and they sometimes went to Mass in Timahoe.

About 1920 the Church in Timahoe was surrounded by British soldiers with fixed bayonets during Mass. I was one of the mass servers. I think Paddy Scully, Jimmie Kenna and myself were serving that Mass. I remember getting a fright when we opened the vestry door being confronted by a soldier with a fixed bayonet. He ordered us back.  We stood looking at him for a few seconds when Mag Antony came to the door with tea on a tray for the Priest. She told us to go on out of the way. The soldier stood in front of us. She turned to the soldier and said, “let out them children, they wont ate you” and he stood back and let us pass out. They had the Sergeant from Timahoe standing beside the Officer at the main gate and all had to pass them by and a few were put back and searched. There was no-one arrested.”

The “Sergeant from Timahoe” was presumably a Royal Irish Constabulary Sergeant who was, or had been, stationed locally. On the night of Easter Saturday April 3rd 1920 the vacated Timahoe R.I.C. barracks was burned by the I.R.A., one of a multidue of such barracks attacked across the county that night.[8]

The three foregoing incidents were clearly what stuck most in Jack Quigley’s mind – he had only started school in 1914 so of course earlier events may have been just that bit more inexplicable to a young child or were concerned with more distant places. He does mention in passing some other happenings:

“About 1912 Redmonds Volunteers was formed and they did some military training with wooden guns. Timahoe had a group involved.

At the outbreak of the 1914 war the British Government carried out recruiting campaigns. Their catch cry was “Save Small Nations”. Eight or Nine from Timahoe area joined – 2 Kerrs – Tom and Bod, 2 Buggies, 2 Byrnes, Bill Murphy, Lar Mc Donald. Four of them returned from the war.”

He also refers to “some kind of Land League” and “a Cattle Drive sometime around 1917”. He mentions the pipe band featuring in celebrations greeting three men arrested at this event. A cattle drive was the herding of animals off a disputed property – in the most stylised form the animals would be herded to the owner’s house. The 1917 cattle drive in Jack Quigley’s reminiscence was most likely that on the Lamberton estate in May 1917 – which involved farmers from his home townland of Ballygormill and the Timahoe pipe band and yet again Timahoe’s R.I.C. sergeant.[9] That’s all a story for another day though.

[1] Terry Dunne, ‘The Cattle Drives of 1920: Agrarian Mobilisation in the Irish Revolution’, The Irish Story, https://www.theirishstory.com/2020/11/24/the-cattle-drives-of-1920-agrarian-mobilisation-in-the-irish-revolution/#.Ygq0h9_P3IU

[6] Michael Rafter, The Quiet County: Towards a History of the Laois Brigade IRA and Revolutionary Activity in the County 1913–1923 (Naas, 2016) 69. http://mspcsearch.militaryarchives.ie/docs/files//PDF_Membership/8/MA-MSPC-RO-169.pdf 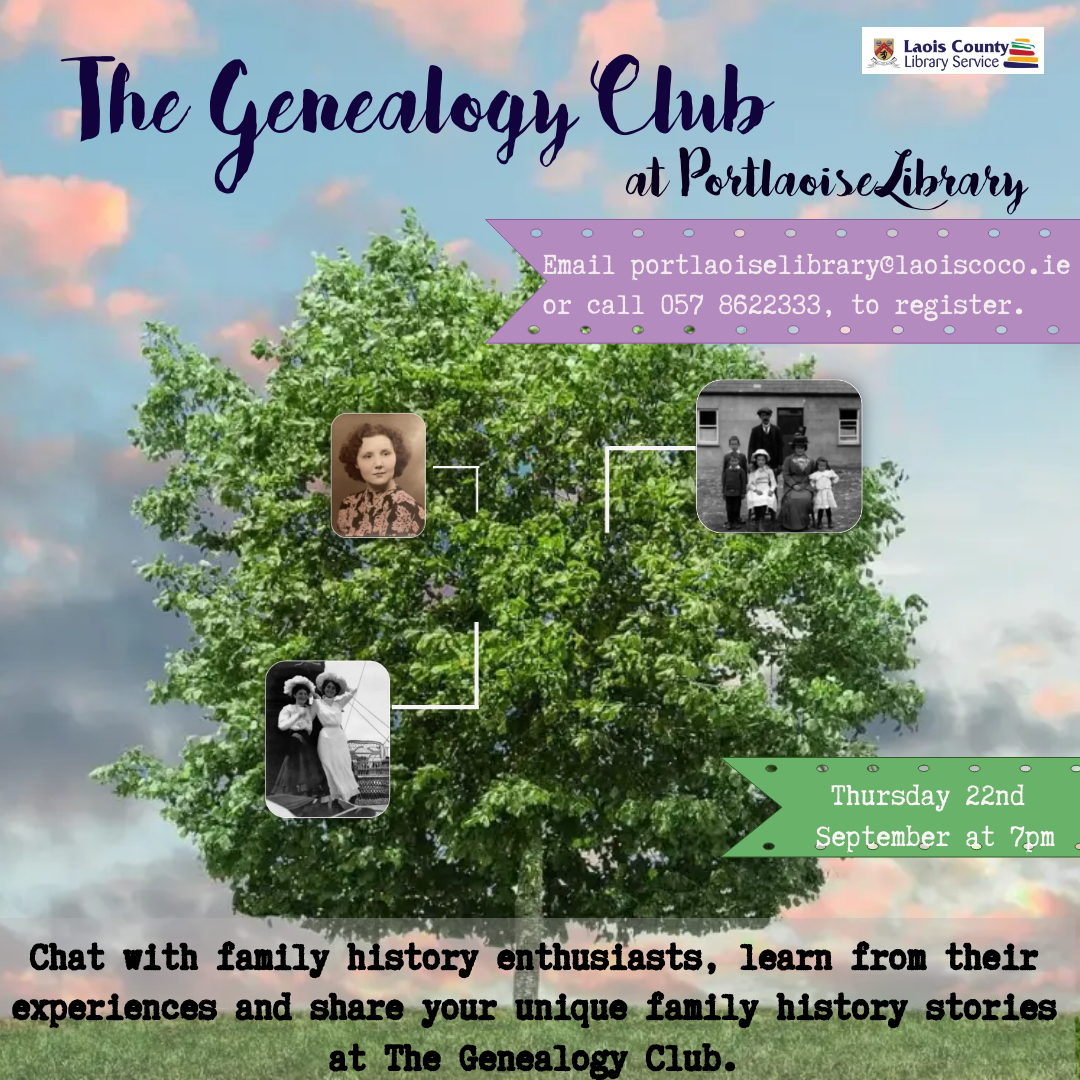 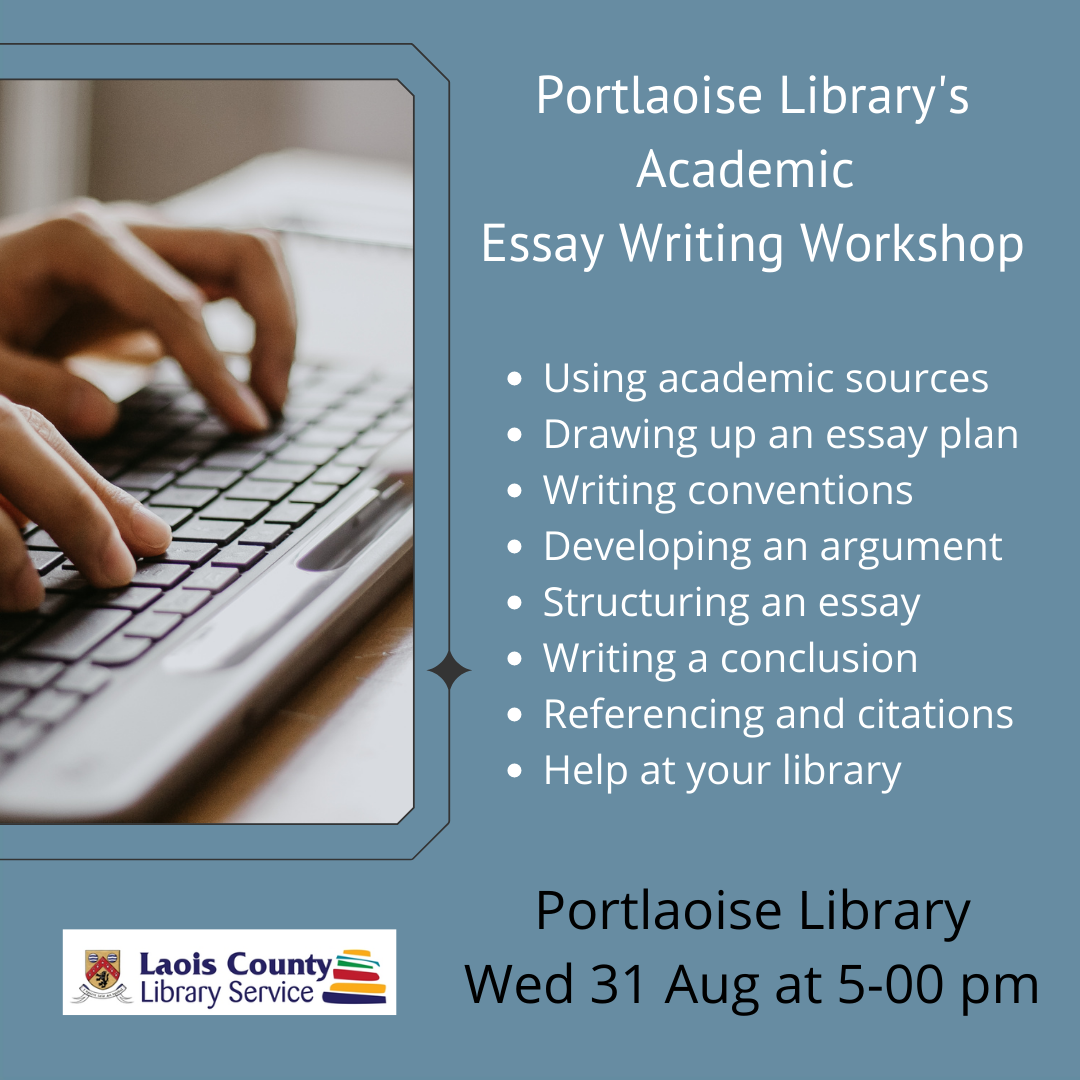 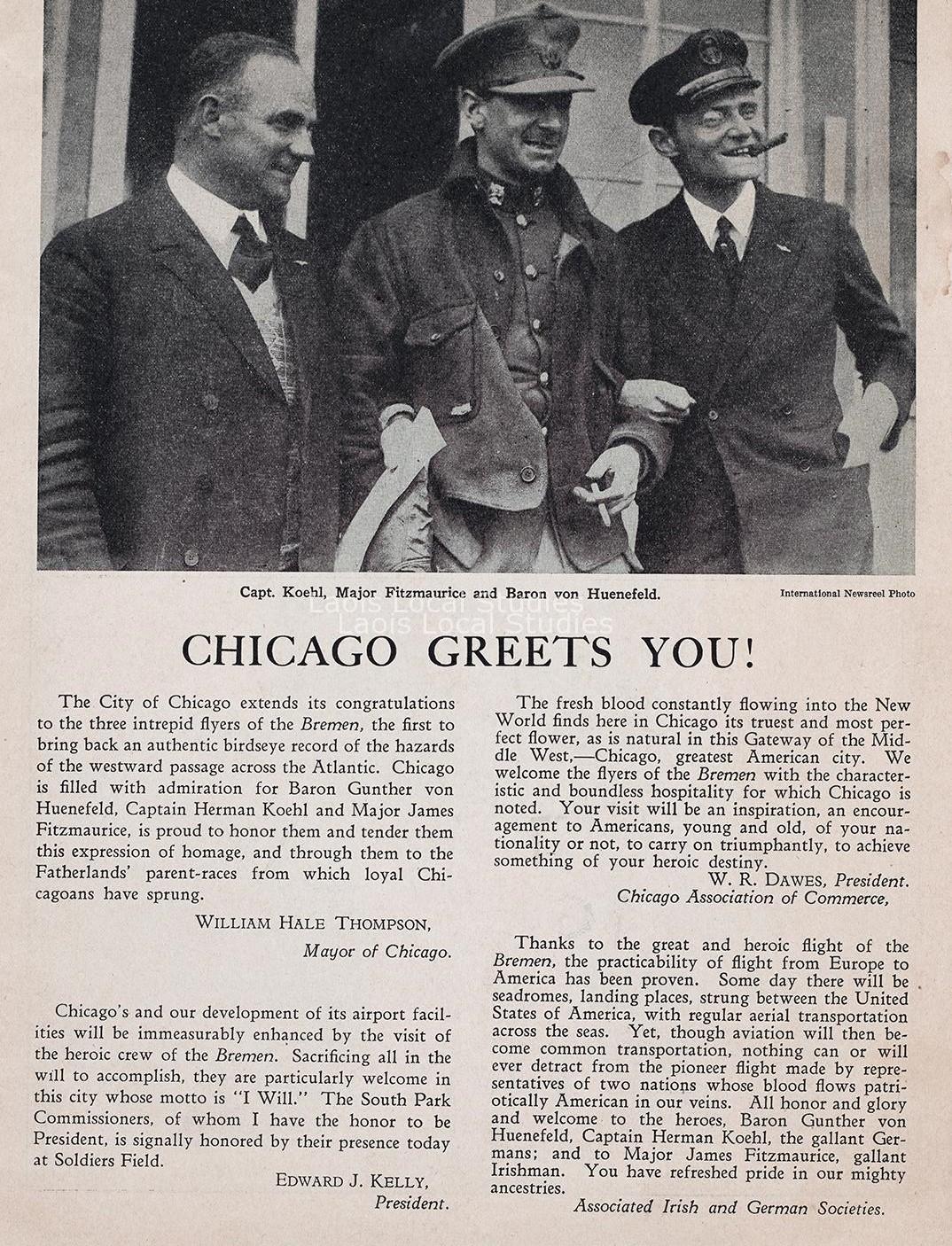