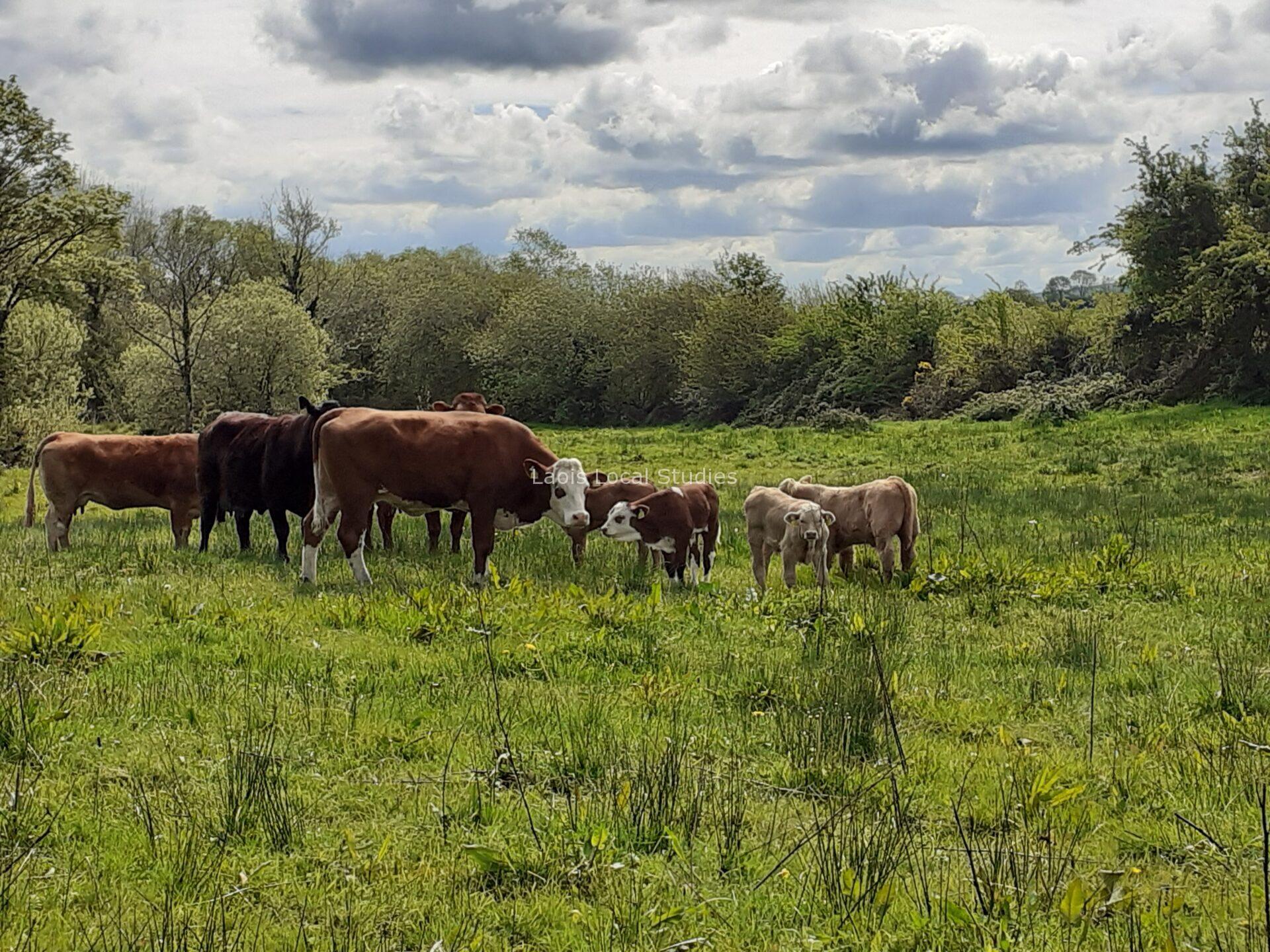 On the 12th of March 1922 there was a cattle drive in the townland of Ballycarnan. Ballycarnan is just south of Portlaoise, to the east of the road to Abbeyleix. The property was then owned by Miss Flora S. Cassan of Sheffield House. In her evidence when making a bid for compensation in 1924 she claimed “there was a sustained agitation going on for some time for the division of those lands.”[1]

So the event on the Cassan farm can show us something of how such an “agitation” was conducted. A cattle drive was simply the removal of animals from a disputed property. In this case there were also the destruction of gates. The point was to force the sale of the property — usually to the government or some other public body — and its re-division in smaller portions to the neighbours. In the Cassan case there were also notices posted up warning against putting the cattle back on the land. As well as the drive on the 12th of March 1922 there was another on the 31st of July 1922. Flora S. Cassan seems to have lost a bit of money out of this — the animals depreciated in value, one died, and several remained missing — but it was possible to make a malicious injuries claim and be recompensed by the state.

While the standard narrative of Irish history has the land struggle in the past by the time of the revolution in fact this was very much not the case. Ireland was rocked by the Ranch War in the opening decade of the twentieth century and in many ways what was going on during the revolution was following the model of the Ranch War. The cattle drive on the 12th of March 1922 fits into a broader pattern during the revolution. There were successive waves of land agitation in 1918, 1920 and 1922. Land Acts of 1923 and 1932 played a significant role in consolidating the new state.

In 1917 there was a cattle drive at Lamberton, in between Timahoe and Portlaoise, and in fact not that far from Ballycarnan.[2]  The Lamberton cattle drive culminated in a Royal Irish Constabulary baton charge on the street in Stradbally. The intervention of District Councillor P. Dunne defused tensions by allowing the police away with the cattle, while marshalling the crowd into military formation to parade around the town. Significantly, the rally following this parade took place under the Republican flag (the tricolour as opposed to the green flag more common before then). However, the Lamberton situation was a long-running one — stretching back at least to 1910, likewise there was earlier trouble involving Cassan lands in the years running up to the Great War.[3] The Lamberton lands were secured for re-distribution, but probably on a temporary, or ‘conacre’, basis.[4]

Interestingly regarding the Lamberton property the fear was raised that the land would be purchased by a state agency and re-distributed not to locals, but to migrants from the West.[5] At this time a property could be sold to the Estates Commissioners in much of the country with ownership of the tenants’ holdings transferred to the tenants and untenanted or demesne lands possibly re-distributed. The Congested Districts Board in the West had powers of compulsory purchase though, and more emphasis on re-distribution.

Often the targeted proprieties were ones it was expected would be sold, so the point was to keep the price down, speed up the sale, scare away other potential buyers and so on. They were often properties rented out under the so-called 11-months system, or conacre, where there was an annual auction of grazing rights. This was the case on the Lamberton estate.  It would not be a stretch to think Flora S. Cassan’s gender and unmarried status was a factor.

Part of the reason for the renewed agitation in the context of the World War was these state agencies had curtailed land re-distribution owing to government cutbacks to pay for the war. Rising land values due to the booming farm profits caused by wartime inflation was another important factor.  Rising food costs was yet another — for this reason the 1918 movement was known as the tillage movement — the expressed grounds was that land would be taken over for growing food for feeding the local populace as opposed to feeding the export-orientated beef industry. A matter of food security one might say. So in Clonaslee in March 1918 parts of two grazing farms were ploughed up before the intervention of the R.I.C.. In 1918 this was very much a Sinn Féin and Volunteer-led movement, but things would be different in that respect in 1920 and 1922.

In the instances in Clonaslee we see another pattern of illegitimacy ascribed to particular forms of property ownership.[6] So a Mr. Hackett held “a ranch of over a thousand acres”, it is unclear if he owned the property in fee simple or held the leasehold (that is, was a tenant), whatever the case that is a very big farm. While Mr. Corbett had two farms — and it was his second, non-residential one, which was targeted. The fact that Corbett was also a Councillor, representing Killeigh in Offaly, gives us grounds for at least suspecting part of the plan was to embarrass him politically. As with the Lamberton and Cassan cases there had been an earlier agitation which involved the Hackett property.

What happened in 1920 is Sinn Féin sought to put a dampener on the movement, which had, on the east Connacht plain, assumed great vigour.[7] Hence in 1920 we see prominent Republican speakers warn about the dangers of the renewed mobilisation. This was a significant topic in speeches in Laois in that year, including from a visiting figure, Father Michael O’Flanagan, who would generally be seen as being on the radical wing of the party.[8]  Ultimately an outcry over landlord-tenant relations was safe for a nationalist party, while an outcry over inequities in the distribution of property was much more problematic. For this reason, there was a big push in 1920 to establish Dáil Courts and Republican Policing. Local I.R.A. units didn’t always go along with this, as was the case in Derrinsallagh.[9] That’s just south of the M-7 exit for Borris-in-Ossory. That dispute was on the Lyster estate. There were also several cattle drives, rallies for released prisoners and so on to do with a Roe property in near-by Ballybrophy.[10]

Sometimes these conflicts were on lands still owned by landlords – or often in effect owned by ex-landlords – the amount of land owned by landlords and farmed by them is often overlooked. In so far as this is the case what strikes me is how the same names come up as featured in similar strife ninety years earlier – the names Lyster and Cassan are prominent among landlords challenged by the early-nineteenth century Whitefeet movement.[11] Likewise, the best remembered land conflict in Laois during the revolution is the expulsion of the so-called Luggacurran planters in April 1922.[12] The Lansdowne estate where that happened was, of course, preeminent in the Plan of Campaign (1886-1891), but its history of contention can be traced back at least as far as the 1830s.

On the other hand, what was happening in 1918, 1920 and 1922 was against a new backdrop of World War and then a world revolutionary wave. Interestingly the owner of the Lamberton estate had a career in the British armed forces like so many minor Irish gentry.[13] Major Micheal James Sweetman died while in command of the 2nd Battalion Dorsetshire Regiment. He was fatally wounded on the 21st of November 1915 at the battle of Ctesiphon, in Mesopotamia, or Iraq as we now call it. This was the furthest point of advance of the British expeditionary force to Baghdad, soon to be disastrously encircled in Kut Al Amara. The latter city is where Major Sweetman has his final resting place. Readers of Irish revolutionary memoirs may recall Tom Barry’s Guerrilla Days in Ireland opens with his part in a relief force attempting to lift the siege of Kut Al Amara. Readers of these articles may recall an earlier one in the series where the 2nd Dorsets and 1st Leinsters fought in a counter-insurgency campaign in south-west India in 1921-22.

[7] Terry Dunne, The Cattle Drives of 1920: Agrarian Mobilisation in the Irish Revolution, The Irish Story,  https://www.theirishstory.com/2020/11/24/the-cattle-drives-of-1920-agrarian-mobilisation-in-the-irish-revolution/#.YiVmo_zLdy0

[11] Terry Dunne, The Whitefeet: Social Conflict in Kilkenny and Laois Before the Famine, The Irish Story,   https://www.theirishstory.com/2020/12/23/the-whitefeet-social-conflict-in-kilkenny-and-laois-before-the-famine/