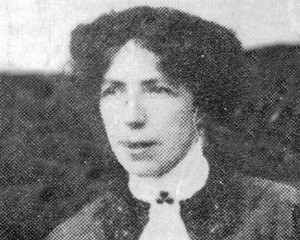 On Sunday the 4th of June 1922 open-air rallies took place in Portlaoise and Rathdowney in support of Labour candidate for the Leix-Offaly constituency, William Davin.[1] In this article we are going to look at Cissie Cahalan — one of the speakers at the rallies and at shop workers more generally. Cissie Cahalan was then President of the Irish Union of Distributive Workers and Clerks.

William Davin and the 1922 election.

The rallies were held in the run-up to the election which was to take place on the 16th of June – the first election in the new Irish Free State. As it happened William Davin got 15,167 votes, 46.54% of the vote share — nearly two and a half times the quota.[2] Doubtless Davin was helped by the fact that this was the ‘pact’ election where there was supposed to be an agreement between anti-Treaty Sinn Féin and pro-Treaty Sinn Féin. Consequently, there were no anti-Treaty Sinn Féin candidates for Leix-Offaly. Nonetheless in a more competitive market in August 1923 Davin still topped the poll with 6,323 first preference votes.  It should be noted that at the time there was no Labour party as such, it was more the electoral wing of the trade unions, for instance, the decision to nominate a candidate was taken at a meeting in Tullamore in April 1922 — a meeting of representatives of local union branches.[3] That is all another story though from the main focus in this article.

As social historian John Cunningham explained: “Shop assistants habitually worked six fourteen hour days a week; laboured wage-free for the duration of a three-year apprenticeship; endured almost monastic restrictions on their private lives; and complained of being fed the poorest quality food in the most meagre portions.”[6] Opposition to living-in was fuelled by particularly shocking incidents of fires in shop buildings, at their worst including deaths as in Dublin in 1905 and Limerick in 1913.[7]

Cahalan, who was born in either Cork or Tipperary in 1876, lived in Dublin, working in Arnotts’ department store.[8] She was also a noted campaigner for women’s suffrage, active in the Irish Women’s Franchise League.

Cahalan’s speech in Portlaoise was transcribed and published in the Nationalist, doubtless the speech in Rathdowney was substantially the same.[9] Here are some extracts:

“For the past three or four years the working class had put up a fight and endured for the redemption of the country from the rule of the biggest tyrant in the world, the British Empire. There was a lull in that fight for the moment, and if that particular phase of the fight was not recommenced the fight of the working class for liberty would take on a new shape, because, let them not make any mistake about it, if the present members were [re]elected [and] formed a National assembly that assembly would be founded on a capitalist basis. . . .

It was about time that they had a little self-respect, and come out of the darkness and gloom they had been living in and stand right up straight and look at the sun and say they wanted a share of the earth (cheers). She and a great many of them did not own one square sod of the country. They had been asked to fight for it and they fought for it. They had been asked to die for it and some of them died for it, and others were ready to die for it. But she thought it would be much better now if they could make the country so that they could live in it (hear, hear). They would have to give up looking for politicians to do their work for them. They must come along and do it themselves, and the only way open to them to do that was through the Irish Labour movement. That movement, she must say, did not go as far as she wanted it to.”

There are some interesting aspects of this speech: it is much further to the left than we might expect from the memory of later decades of the twentieth century; it shows that people at the time didn’t necessarily think of the revolution as over in 1922 or 1923 – so much as possibly entering a new phase; and that this process of revolution had divisions within it – as, for instance, in Cahalan’s point that the movement was not going far enough.

Shop workers in Rathdowney in the 1911 census.

We can dive into how Rathdowney was recorded in the 1911 census to see something of the living-in system. The 1911 census is the nearest available census to 1922 as the 1926 census has not been made publically available yet. Let’s take a look at “House 33” The Square – that is the Williams’ shop.[10] As well as brother and sister Joseph and Nannie Williams another eleven people are recorded as living on the premises. That is a living-in staff of eleven — one grocer, one milliner (a maker or seller of women’s hats), two drapers’ assistants, two iron mongers’ assistants, three grocers’ assistants and two domestic servants. All were single, most were aged between 20 and 30 —there were outliers aged 19 and 34. Leaving the domestic servants to one side almost all were members of the Church of Ireland and from other counties – like Wexford, Wicklow and Cavan. The relative youth, migrant situation and single condition of these shop workers was not untypical. Nor is it irrelevant — it was surely part of the reason why shop workers were often to the fore in cultural and social life such as in sporting associations or in amateur dramatics or in the Gaelic League.[11]

The Rathdowney branch of the Irish Union of Distributive Workers and Clerks.

Rathdowney seems to have had an active organisation of retail workers and they are recorded as being represented at the Ossory and South Leix Trades Council meeting in the Agricultural Hall, Rathdowney, in July 1921.[12] W. Bonham of the Distributive Workers of Rathdowney spoke on behalf of the Laois delegation at the aforementioned Tullamore meeting deciding on standing a candidate in the 1922 general election.[13] W. Bonham was also a delegate to the national Trade Union Congress meetings in August 1921 and August 1922.[14] In the second instance he intervened in favour of the Labour demand to end the proroguing of the Third Dáil (which was due to meet on the 1st of July, but didn’t until the 9th of September —so no parliament sat while the Civil War was launched).[15] Bonham’s role might help explain why Cahalan was one of the national leaders speaking in Laois and why one of the rallies was Rathdowney — the president of his union as a speaker and the square in his town as a venue.  Moreover, the candidate, William Davin, was himself a Rathdowney man.

The most effusive outpouring of newsprint concerning the Rathdowney shop workers’ union branch was about a less portentous event —a dance. But that was no accident either when one considers the young and single nature of people with retail occupations. In January 1920 the Nationalist reported:

“The first dance of the Rathdowney Commercial Club, under the auspices of the local branch Irish Drapers’ Assistants’ Association, which was held in the Donaghmore Union Buildings on the night of the 20th inst, was well patronised, upwards of 100 couples being present, many travelling in motors from Durrow, Johnstown, Abbeyleix, Ballacolla, Roscrea and Killavilla. The dancing floor was in splendid order, and the decorations reflected credit on the artistic taste of the committee. The music of Gill’s string band was exquisite, and the catering, which was entrusted to Messrs. Wilde and Co., left nothing to be desired.” [16]

Ordinary life went on amid all the extraordinary events.