Showcasing Laois History and Heritage
An Initiative of Laois Library Service
Laois Local Studies > Articles > ‘Farewell to the scraws and the scallops’: Songs of Social Change 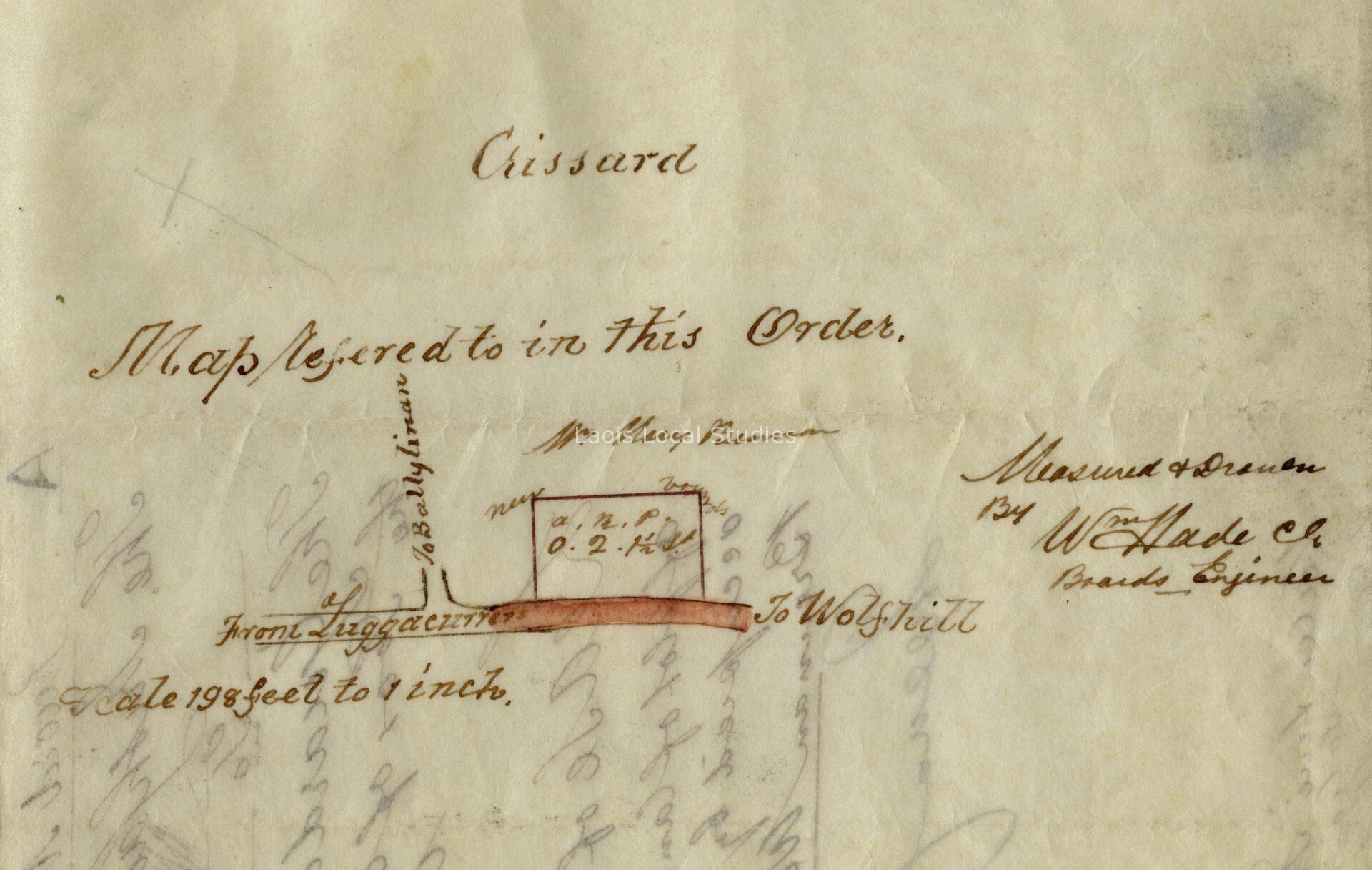 Map of parcel of land in the townland of Crissard being transferred from John Grace of Gracefield to Widow Mary Brennan of Crissard, Wolfhill, under the Labourers (Ireland) Acts, 1883 to 1886

This article is about three ballads current locally in the opening decades of the twentieth century, all of which speak to that time as a period of profound social change.

‘The Comfort of a Labourer’s Cottage’ and ‘The Boardroom of Roscrea’.

The first two songs were written by Luke Kinahan, from Killavanogue, a townland in Tipperary just outside the Laois border near Lisduff and Errill. I found the first of these songs in the Laois Association Yearbook of 1984.[1] It was described in the Yearbook as a “popular party piece in the area during the ‘thirties”. It, and the next one, concern an agitation in Roscrea Poor Law Union for the provision of public housing. A Poor Law Union was a local government area overseen by a Board of Guardians. The Roscrea Poor Law Union included parts of what are now counties Laois and Offaly, as well as, more obviously, part of county Tipperary.  The second song, ‘The Boardroom of Roscrea’ I found in the Schools Folklore Collection, the well-known collation of folklore made in the national schools across the countryside and provincial towns of the 26 counties in the years 1937 and 1938.[2] The songs concern the workings of the 1892 Labourers (Ireland) Act which empowered local government bodies to house rural workers. The “Tauner” referred to in the first ballad was Dr Charles Kearns Deane Tanner, the Irish Parliamentary Party Member of Parliament for Mid-Cork (one of “our brave Irish members” as the song puts it). Tanner was a particular force behind the 1892 Act and was well known for his record of being ejected from the House of Commons for pro-Home Rule obstructionism.  The 1892 Act was a new, improved version, of legislation dating back as far as 1883.

Many more such houses were built under the Labourers (Ireland) Act of 1906 —about 50,000 by 1914, mostly across Leinster and east Munster. Public housing was still being rolled out, as they say, in the 1930s, especially in the towns. This perhaps accounts for the continuing popularity of the song, it still had immediate resonance.  Both ballads reference “plots” and “acres” because the houses came with large gardens for vegetable production. As ‘The Boardroom of Roscrea’ makes clear the granting of cottages faced opposition from farmers —in part because more cottages made for less land for farmers. Although this mobilisation predates what is conventionally thought of as the revolutionary years, the issue continued into the later times. Most especially in the context of the food supply crisis associated with the First World War, which led to demands for larger cottage gardens. By the way a scallop was a hazel rod used to fix thatch in place, the scraw was a layer of sod that went under the thatch. I suppose now we might tend to romanticise vernacular architecture, but Luke Kinahan at least, and likely thousands more like him, were glad to see the back of mud walls and dripping roofs.

The Comfort of a Labourer’s Cottage

Farewell to the scraws and the scallops

Farewell to the sootdrops and rain

Farewell to the smoke and the cobwebs

That frequently moldered my brain

Those filthy vile plagues are all over

I fancy myself now in clover

Since I got a new house of my own.

By plans, schemes and specifications

The Labourer’s Act was composed

To better our sad situation

And please and comfort disclosed

I wish the poor men of the nation

From Cork to the Co. Tyrone

Were possessed of a cottage and acre

The comfort obtained from those houses

Not to talk of the acre at all

Your heart would resound with carousels

As they guard off the wintery squall

They belong to the blessing of nature

The truth unto you I’ll make known

Kind smiles would adorn your features

In a cottage and plot of your own.

Oh many a journey I’ve travelled

In pursuit of a cottage and acre

At length they agreed and consented

Full justice to me they have shown

They gave me a plot and a cottage

And now I can call them my own.

Long life and success to those heroes

Who fought for our rights at the Board

May they flourish and live in full splendour

And their praises in song be encored

To sound all their names would be weary

Their actions to you I’ve made known

They’re a credit to gallant Tipperary

They gave us grand homes of our own.

Then! Hurrah — for our brave Irish members

Who struggled by night and by day.

The Labourer’s cause they defended

Their efforts did nobly display,

Through Ireland his actions are known

He secured the poor man with an acre

And a smashing fine house of his own.

The Boardroom of Roscrea

I’ll sing for you a verse or two and

I mean those worthy labourers who

How they were disappointed at the

We went there to assert our rights

our numbers were three score

We went to meet the Guardians and

hear what they would say

About our plots and Cottages at the

When we reached the Union regardless of our foes

We met some filthy farmers who did our claims oppose

They trailed us there from Shanakill

and Clonmore all the way

To trample on the Labourers acts at the Union of Roscrea.

We had some more opponents from the Parishes all around.

They came with vengeance on their lips our cause for to betray.

And swamp us in our Cottages at the Boardroom of Roscrea.

If you were to see those farmers before they were called

Some of them were barefaced scamps while others were quite bald.

More of them were ghastly like or drooping with decay

You’d swear they came to seek relief to the Union of Roscrea.

So boys don’t fret we’ll have them yet and on our cause must go.

We’ll be happy in our cottages in spite of every foe.

that ever they opposed us at the Union of Roscrea.

The Land for the People.

Author of the next song, Patrick Aloysius Meehan, was the Irish Parliamentary Party Member of Parliament for the Queen’s County Leix constituency from 1906 to 1913 (that was basically the eastern portion of Laois). There are words there about “the Land League banner”, but it is likely that this ballad is from a period after the Land War, although veteran activist Meehan was most certainly present in 1880. Verses about “the eleven-months man” and “the grabbers” and the “land-shark” would suggest more a provenance from the early 1900s, the time of the United Irish League and the Ranch War. An “eleven-months man” was someone holding land for less than one year, land which was sometimes referred to as untenanted land, as someone with such a holding was not afforded the legislative rights of being a tenant. Perhaps paradoxically the monopolists of such lands were wealthy graziers. These were often the lands targeted in cattle drives during the revolutionary period, and, after the Land Act of 1923 a lot was re-distributed by the Land Commission. I found this song in the Laois Association Yearbook of 1991.[3]  There are two things particularly worthy of note about this song somewhat at odds with how the past is sometimes remembered. Here an Irish Parliamentary Party politician is evoking a heritage of republican insurrection, “Vinegar Hill”. People had perhaps less distance to move between supporting the Parliamentary Party and supporting Sinn Féin than we might think.  Also, while landlords are the perpetual villains of popular history, doubtless an easy role for them to fall into, this song concerns conflict between different strata of farmers as much as conflict with landlords.

The Land for the People

Come, let us sing the motto of our dear native land,

Shouting the battle-cry of freedom;

Beneath the Land League banner again we’ll take our stand, Shouting the battle-cry of freedom.

The land for the people! Hurrah boys, hurrah!

Justice and Freedom and Erin-go-bragh!

We’ll rally round our flag, boys, we’ll rally once again,

Shouting the battle-cry of Freedom.

We are springing to the call of our stricken people’s cry,

Calling for aid against our tyrants;

We’ll crush the eleven-months man, the grabbers —or we die,

Shouting the battle-cry of Freedom.

We will step into the places of our brothers gone before,

Who fought the same good fight we now are waging;

The land-shark and the grabber shall curse the land no more,

To this good work our lives we are engaging.

They may prosecute and jail us, as they often did before;

We are ready for the fight, and vow to win it;

The evictor and the grabber shall be driven from our shore,

We must win the land, ‘tis ours and we shall have it.

Our fathers fought and conquered at Ross and Vinegar Hill,

And died for the cause we are defending;

By all our hopes and by our dead, we’ll fight the battle still,

On God alone and on ourselves depending.