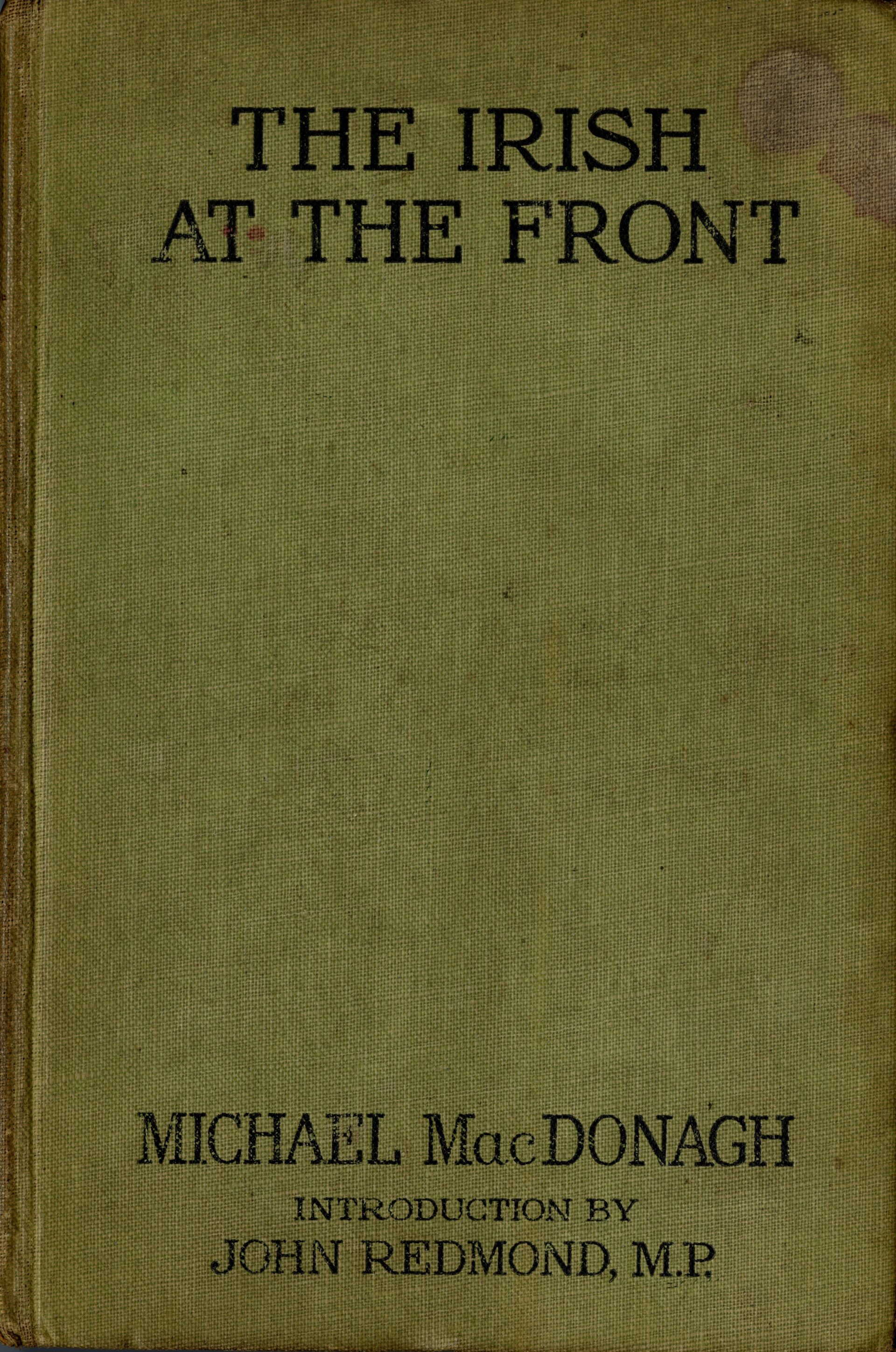 Some veterans of the Great War came home to war — they put their Royal Irish Constabulary uniforms back on, or they were shot as informers by the Irish Republican Army, or they joined the I.R.A. and provided a much needed leaven of military experience.  This article tells the story of some of these men — ones from Laois or with Laois connections.

As we have seen in an earlier article ex-soldiers were a disproportionately large category among those slain as spies by the I.R.A. Link to article. There were, however, also ex-soldiers within the ranks of the I.R.A.. In both cases these represented only tiny slivers of the large segment of the adult male population who were British Army veterans. In so far as organised bodies of ex-soldiers participated in the revolution it was in a much more civilian role: such as taking part in the demonstrations in support of the Mountjoy gaol hunger strike in April 1920; while some ex-servicemen were elected as specific ex-servicemen’s candidates in the January 1920 municipal elections (e.g. supporting the joint Transport Union-Sinn Féin control of local government in Cork, or the ex-soldiers/labour candidate elected in Nenagh).[1]  Often they were agitating for their specific interests, for instance delays in the supply of land and housing under the Irish Land (Provision for Sailors and Soldiers) Act of 1919 led to a protest meeting in Mullingar in August 1920 which heard that ‘ex-service men should go out and take the land compulsorily’ along with advocacy of cattle driving.[2]  As discussed in an older article there were rival veterans’ associations with differing political inflections. Link to article. There were of course also veterans of 1914-18 in various state forces of the period — be it the British Army, the National Army, the Ulster Special Constabulary or the Royal Irish Constabulary. While being the possessor of a few medals and a fading uniform in no way protected one from a violence which, though calculated at the level of the cabinet, seems random at the level of street, as, for instance, in the killing of Thomas Lawless in January 1921. Link to article.

James McIntosh was a thirty-four-year-old native of Portlaoise (then Maryborough) who had been a Lance-Sergeant with the Royal Dublin Fusiliers in France. He suffered in the war – with a facial injury, gas poisoning and bronchitis. Upon demobilisation he made his home in Dún Laoghaire (then Kingstown) and worked as a butcher’s assistant.[3]

On the 19th of June 1921 James ‘Jim’ McIntosh spent the evening with his fiancé Katie ‘Kitty’ Mooney at the Pavilion Picture House. It was six weeks before the day set for their wedding. After the date Jim took on one of his other roles – that of 2nd Lieutenant, D Company, Sixth Battalion, Dublin Brigade, Irish Republican Army.  His mission was assassination. The Royal Marine Hotel was a popular watering hole for the Crown Forces. Just before 10 p.m. a four-man Volunteer team entered the hotel to find and kill a Royal Irish Constabulary officer named Gregory. Two went upstairs to Gregory’s room. James McIntosh and another had the role of guarding the foyer. The plan went awry. Gregory was still downstairs in the dining room, as were two officers of the Royal Berkshire Regiment named Dowdall and Gilbert. The latter two, upon finishing their meal, entered the foyer into the unaccustomed scenario of receiving the barked orders of a one-time British Army sergeant — ‘Put your bloody hands up!’. McIntosh set about searching them, but they pulled their revolvers and fired, hitting him three times, he got off two shots and staggered out into the night. He died in hospital a few days later. Unfortunately for the authorities dead insurgents can prove as problematic as living ones, if not more so, and McIntosh’s funeral formed the setting for a proud and defiant mobilisation.

Denis Lenihan’s blood was likewise to run on a Dublin street. He too was a mid-30s ex-sergeant of the British Army, only of the Leinster Regiment rather than the Royal Dublin Fusiliers. But it was the bullets of the I.R.A. that cut him down in March 1921. He resided at Orchard Lodge, Crumlin, and from trawling the census records I believe he hailed from Ballybrophy.[4] Lenihan was singled out as a spy, he was a clerk at Islandbridge barracks – so he was still in military employment though no longer a soldier – worse yet he had recently been a clerk in Ballykinlar internment camp.

Lenihan’s prostrate body was left, “bleeding profusely”, at the corner of Cork street and Ormond street.[5] He was rushed by three I.R.A. Volunteers opening fire, but he learned his ducking and diving in Flanders against a more formidable foe than that the Liberties could offer. He ran and the I.R.A. men emptied their guns, they inflicted five wounds, but none fatal.  Unfortunately, the same could not be said of those on a bystander. Three bodies were left at the corner. 47-year-old Patrick Brady of nearby Reginald Street was also wounded and tragically 12-year-old Hannah Keegan of Cork Street was killed.  The second eldest of six children Hannah was returning with the messages – a parcel of sugar and green peas – when she was caught up in the melee.[6]

On Wednesday the 19th of May 1920 Kieran Dunphy was gunned down by the I.R.A. in Limerick.[7] He was a Royal Irish Constabulary Sergeant and onetime Lieutenant of the 2nd Battalion Leinster Regiment. Dunphy was from Cullohill and was buried in Durrow.  He had been accompanying an unwell workmate, a sergeant Hearty from south Armagh, to the doctor’s surgery in Mallow Street, Limerick City.   That night his colleagues let their anger rip on Limerick’s citizenry, which resulted in the death of James Saunders, also an ex-soldier, a dock labourer at the time of his passing. The coroner’s court found that this was “murder on the part of the police in firing into the street without any provocation”.[8]

One of the more unusual and interesting cases among the cohort of former British soldiers turned I.R.A. Volunteers was Charles Chidley.[9] Chidley signed up with the British Army in 1917 and served in the 6 Battalion, Middlesex Regiment and the 2 Battalion, Royal West Kent Regiment. Together with a comrade he deserted early in 1922 and joined the I.R.A.. Chidley was in the Anti-Treaty Offaly Brigade Active Service Unit during the Civil War and was wounded and captured in a clash at Brittas House, Clonaslee, in August 1922. He was subsequently imprisoned in Portlaoise and the Curragh. Chidley does not seem to have had any Irish familial background – and he was in fact not the only alike character to make the transition from the British Army to the I.R.A.. Reginald Stenning, similarly an English deserter from the British Army, was one of the 81 victims of official state executions during the Civil War.  The 1911‒23 era was a moment of international radicalisation, much like, in this respect, the 1790s or the post-1968 period. So we shouldn’t discount the possibility of political commitments on the part of these men – much like one of the captured soldier characters in Frank O’Connor’s short story Guests of the Nation. On the other hand, the topsy-turvy waves of history can leave individuals like driftwood on a distant shore, doing their best to get through it all and survive.

Michael Fay was from Dublin and lived in Rathvilly, but his small number of comrades in the Carlow Brigade Active Service Unit included men from over the Carlow-Laois border in Graigecullen and Killeshin.[10] The Carlow Brigade area incorporated parts of Laois and Wicklow and a large section of Kildare as well as all of Carlow. Fay was killed in April 1921 in Ballymurphy in the south of that county when an I.R.A. training camp was discovered by a joint British Army-R.I.C. detachment.

Fay was a former Royal Dublin Fusilier. The newspaper report of his funeral is instructive: “The coffin, draped in Republican colours, was borne by Volunteers and ex-service men. Volunteers, Cuman-na-mBan, and ex-service men marched behind the hearse.”[11] Those two sentences should, at the very least, complicate a narrative which became current during the 1990s — one of a society which supposedly ostracised its British Army veterans after 1918. While we would be naïve to think there were not moments of suspicion and friction this narrative owes much to a right-wing American trope of the returned Vietnam veteran spat at and called a babykiller. Not only is this urban legend inherently implausible — pause for a moment and consider the veteran’s likely response — it was actually comprehensively disproven by a Vietnam veteran turned sociologist.[12] Like Protestants, ex-British Army soldiers may be a bit of an awkward fit with the Ireland of the nationalist imagination, but like Protestants they remained a large and significant part of nationalist Ireland. Link to article. Recent chart topper ‘Come out ye Black and Tans’ was actually not written about the Black and Tans, it was written about growing-up in a working-class Dublin where proud peacocks still strutted bemedaled with the laurels of victory over Germans, Zulus and Boers. That is a forgotten world now but it is the world song-writer Dominic Behan grew up in, at least as he perceived it.

Although it has no Laois connection I have to conclude with something of the story of Michael McCabe, because it is simply too good not to share.[13]  McCabe, who was from a republican background, took part in the 1916 Rising, he then enlisted in the British Army in time for the closing stages of the First World War. Returning to Ireland in 1922 he joined the Four Courts garrison for the start of the Civil War. Later he re-joined the British Army, and his correspondence with the military service pensions board includes a letter from Abyssinia, where he was fighting in the Second World War.

[1] John Borgonovo, ‘Revolution, ex-servicemen and the Cork Branch of the National Federation of Discharged and Demobilised Sailors and Soldiers, 1918‒21’ in David Swift and Oliver Wilkinson (eds) Veterans of the First World War: Ex-Servicemen and Ex-Servicewomen in Post-War Britain and Ireland (London, Routledge, 2019) pp. 82‒103.

[4] His name was given in the newspaper reports as Lenehan, but there is a medal card in Kew for a sergeant in the Leinster Regiment named Denis Lenihan and the only one in the census of the right age and location – in the regimental recruiting district – was the son of the railway head porter in Ballybrophy. He seems to show up in the 1911 census under the Lenehan spelling, himself now as a railway porter and living near Hazelhatch in county Kildare.

[12] This is covered in the excellent documentary film about Vietnam veterans and the anti-war movement Sir no Sir!