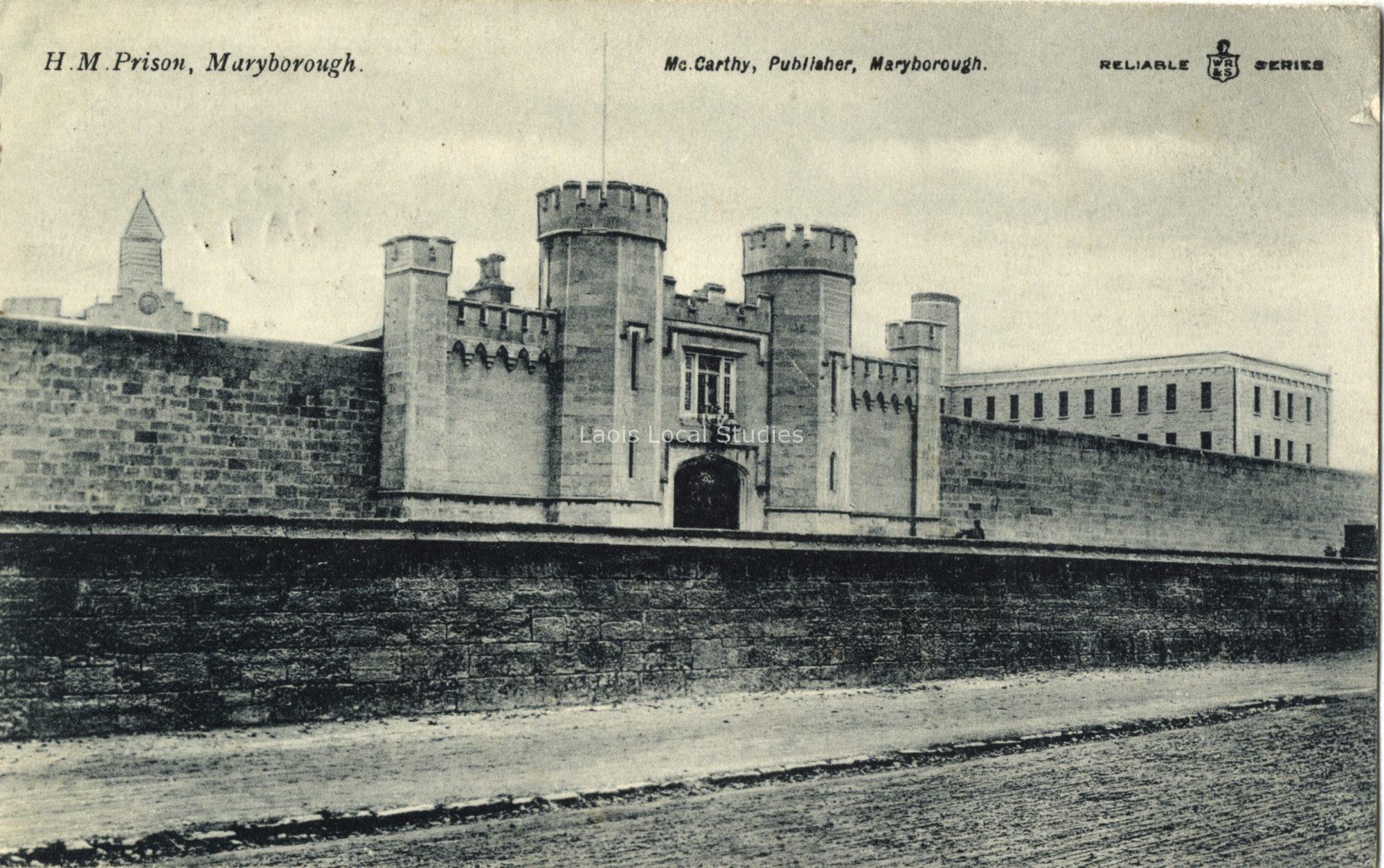 In the middle of February 1922 in a prosaic everyday manner the local newspaper reported the ending of British rule:

“The Union Jack at Portlaoighise Prison, which since the day of the arrival of the Spike internees, was in a battered condition, has been finally removed from the flag staff.

At a Republican Land Court in Portlaoighise Courthouse on Monday, a Republican flag was hung over the Judge’s Bench, covering the British emblems of the Lion and Unicorn.”

The report also mentioned the take-over of the military barracks by “the people’s army”.[1]

On Saturday the 19th of November 1921 hundreds of prisoners were transferred from Spike Island, Cork, to Maryborough Gaol. A local committee was established to support the prisoners and supply them with comforts – one of the organisers was a Miss M. Gray, 89 Main Street.[2] A Mr. R. J. Butler was also listed as the secretary of this committee.[3]

The background to this move was an increasingly tense situation in the prison camps. On the 11th of July 1921 the Truce took effect between the British state and republican insurgents. One might expect that this would lead to the release of prisoners, and indeed the prisoners seem to have expected this too. However, there was no provision for this in the Truce, and, as the months rolled into autumn the republican leadership was faced with a situation where prisoners – and their supporters outside – were taking things into their own hands. This culminated in the middle of October with the internees on Spike Island systematically destroying their part of the camp. “I am dealing with madmen” complained the camp commander Major Kennedy.[4]

So in the middle of December the big news was the release of the prisoners – both the arrival home of Laois men from the Rath camp in the Curragh and Ballykinlar in County Down and freedom for the prisoners in Maryborough Gaol who were from Munster and south Leinster.[7]

The release from Maryborough Gaol took place on Thursday December 8th 1921 – in dribs and drabs all day and the ex-prisoners were gathered up as they were released and brought for refreshments and entertainment. The venue was the County Council Chambers of the Courthouse. Here they heard Bannan’s Orchestra perform popular patriotic airs like “Wrap the Green Flag”, “Soldier’s Song” and “Kevin Barry”, later that evening there was a dance concert.[8] Historian of Portlaoise, John Dunne, described Bannan’s Orchestra as “one of the leading provincial dance orchestras”.[9]

The next day, Friday December 9th 1921, a procession made its way down Portlaoise streets bedecked with republican flags — a procession of marching bands, Volunteer Battalions and released Laois internees, before lining up at the Market Square to hear an address from Captain Laurence Brady. That was for the men released from the Curragh. Then the whole event was done once again over an hour and half later when the men released from Ballykinlar pulled into the station.[10]

Wrapped up in all these celebrations though was a discordant note – the Dáil deliberations on the Treaty were ongoing at the same time as the releases. In August 1922, just over half-a-year away from the jubilant high-point of December 1921, the Spike Island situation was replicated in Portlaoise Prison. On the 29th of August 1922 anti-Treaty prisoners rioted in the prison in conjunction with a sabotage attack from the outside.[11] One prisoner P.J. Hickey, of Inchicore Railway Works and the engineering section of the Dublin I.R.A., was grievously wounded. He died the next day. He was only in his early 20s.[12]