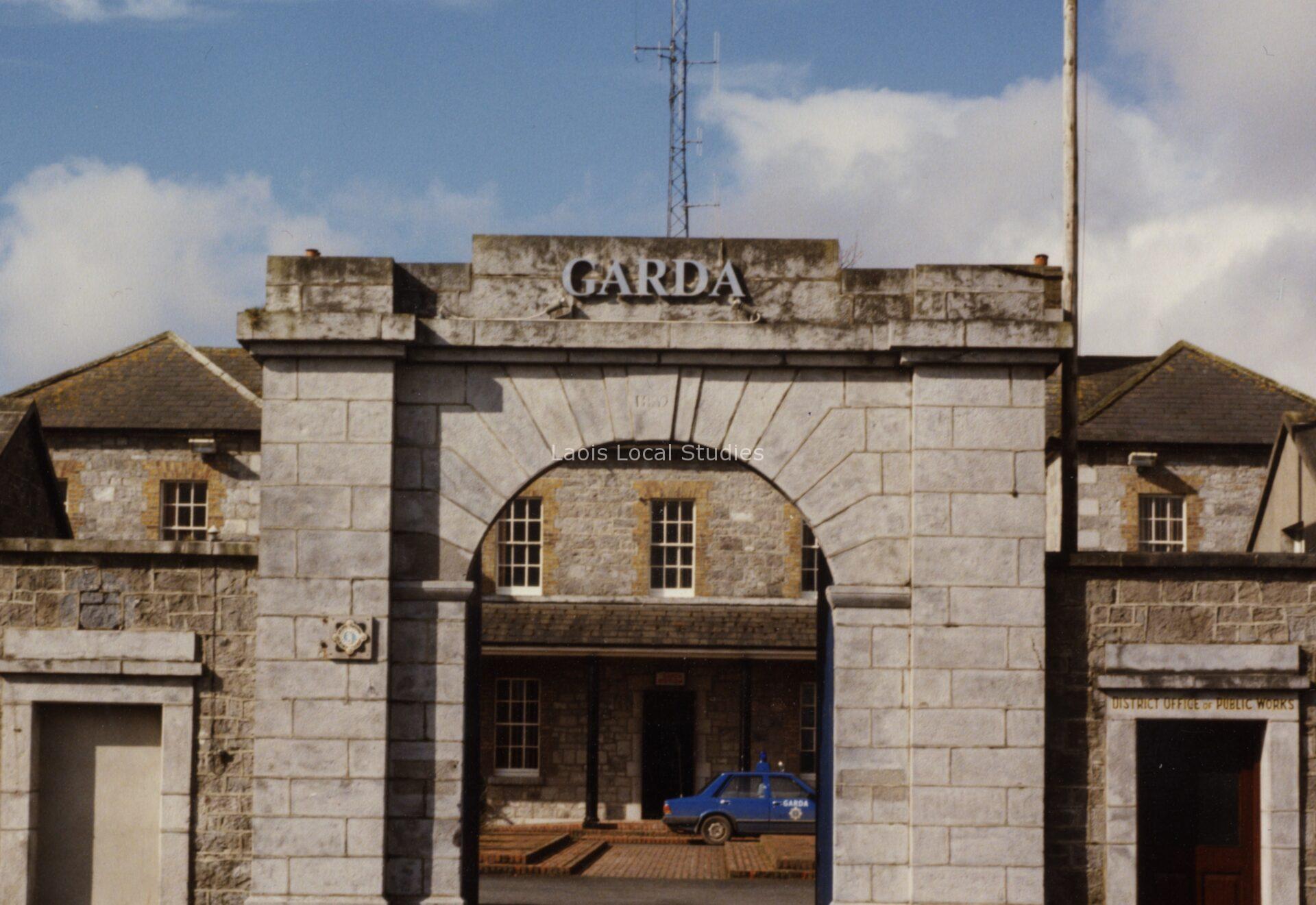 How people experienced ‘The Treaty’ was more as a process than a one-off event. What created most immediate stir was the Treaty’s effects in terms of prisoner releases,[1] barracks hand-overs, and, ultimately, dissension and a new round of political violence. So this article, published in the week of the one hundredth anniversary of the signing of the Treaty, examines how events unfolded on a local level, rather than the letter of the Treaty itself.

The last major evacuation and hand-over was the surrender of Kellyville R.I.C. barracks in Portlaoise on Saturday the 18th of March 1922. In the words of historian Michael Rafter that was “seen by the people as being the end of British rule in the county.”[2] This was the culmination of a series of withdrawals from police stations, army barracks, and temporary crown forces’ posts.

On the 11th of February 1922 the Nationalist reported: “Amongst the recent places taken over by the people’s army – the I.R.A. – are the Portlaoighise Military Barracks, where a detachment from North Tipperary recently arrived, reinforced by another detachment on Tuesday, and the Mountrath police barracks.” [3] Mountmellick R.I.C. barracks was handed-over on the 15th of March, and Portarlington R.I.C. barracks on the 16th of March.[4]  The crown forces had also occupied, and hence had to relinquish control over, Abbeyleix Fever Hospital and Donaghmore Workhouse.[5]

Amusingly, the withdrawal from the military barracks was preceded by clearance auctions. So on the 26th of January 1922, under the auspices of Gaze and Jessop, auctioneers and valuers, Maryborough, literally everything went under the hammer.[6] Military stores up for grabs included all from leather covered mahogany arm chairs, to barbed wire on reels, to linoleum, to sledge hammers, and even new and used flag poles.

But well before this non-cooperation and the development of alternative administrative structures had hollowed out the presence of the British state, made it brittle and buttressed only by coercion. A situation of dual power, or multiple sovereignties, was developed where rival governing bodies contested for control. Locally this involved two key institutions – local government structures which transferred their loyalty to the Dáiland the republican or Dáil courts.

The heyday of the Dáil courts was in the period from the Truce of July 1921, to the beginning of the Civil War in June 1922. For example, in his statement to the Bureau of Military History, long-time Volunteer leader Laurence Brady outlined how:

“From the month of August, 1921, until the outbreak of hostilities in Laois in June, 1922, I attended Republican Courts for Borris-in-Ossory district monthly. I also attended special courts in Port Laoise, Durrow, Ballickmoyler and Clonaslee and other centres.”[7]

The courts principally addressed two issues. Firstly, disputes over land, which, most especially in the spring of 1920, were a significant feature of the revolution.[8] So in some sense the courts were a forerunner to the Land Commission which was reconstituted in 1923. Secondly, the courts had a major crime wave to deal with, especially in these months between the Truce and the Civil War.

On the 18th of June 1920 Queen’s County Council proclaimed its allegiance to the republican government.[9]  That’s still the right name. It wasn’t until the 4th of October 1920 that the council adopted the name Laoighis, in a motion proposed by councillor Lynch and seconded by councillor Collier.[10]  There is an added poignancy from the knowledge that within two years these councillors would be on opposite sides of the Treaty split. The council also voted thanks to the following researchers for advice on the name: Rev. Canon Carrigan, Durrow; F.J. Biggar, Belfast; and, Lord Walter Fitzgerald, Kilkea. Maryborough Town Commission had already made a similar resolution with regard to Portlaoise in September 1920.

We should have no illusions as to the gap of danger people put themselves into through adopting prominent public roles.  In November 1920 the County Council Offices were raided by the police, as was the Town Hall, and seized were minute books and account records of both the Council and Town Commission. Later that day several Town Commissioners and County Councillors were arrested, along with P.J. O’Neill, Secretary of the County Committee of Agriculture and Technical Instruction.[11] While these bodies were the local levels of the government of the United Kingdom, in transferring their loyalty to the Dáil they became the local levels of the government of the Irish Republic —an outlawed organisation. This was especially pertinent in matters of funding and when local government had more of a role in tax collecting, that is to say the rates.

So we can think of the Treaty almost as a culminating moment in the national liberation struggle. Or we can think of it as the undoing of an already existing republican state. Or we can think of it as a bony finger beckoning to a bloody Civil War – something which was to see much more violence in Laois, and in much of Leinster outside Dublin and Longford, than did the Tan War. But to grasp how events seemed to the people who were living them we have also to consider the extent to which some people were not that pushed either way. It is a paradox of Irish history that “Civil War politics” actually seems at its weakest at the time of the Civil War.  Certainly in Leinster and south Munster considerable vote shares in the 1922 and 1923 elections went to Labour, and, to a lesser extent, the Farmers’ Party, though that party had more support over a broader area. In Leix-Offaly Labour candidate William Davin won nearly half the votes in the June 1922 election, though in the special circumstance of there being no anti-Treaty Sinn Féin candidates.

But we shouldn’t suppose the pro-Treaty Sinn Féin support, or the anti-Treaty Sinn Féin support, was comprised of hardened partisans. Ernie O’Malley, prominent anti-Treatyite and later accomplished memorialist, was astounded to find himself elected in Dublin North with transfers from Richard Mulcahy’s vote.[12] Mulcahy, Free State Minister for Defence, had nearly had O’Malley executed earlier that year —and O’Malley was still at that moment a prisoner of Mulcahy’s government. O’Malley concluded that perhaps people voted across Civil War lines because they looked at the protagonists and thought “Musha, God help them. They haven’t much sense, the creatures.”[13]

[1] See the first article in this series: https://laoislocalstudies.ie/maryborough-to-portlaoise-1-the-prison/

[8] Terry Dunne, ‘The Cattle Drives of 1920: Agrarian Mobilisation in the Irish Revolution’, The Irish Story, https://www.theirishstory.com/2020/11/24/the-cattle-drives-of-1920-agrarian-mobilisation-in-the-irish-revolution/#.Ya3N6FDLdy0