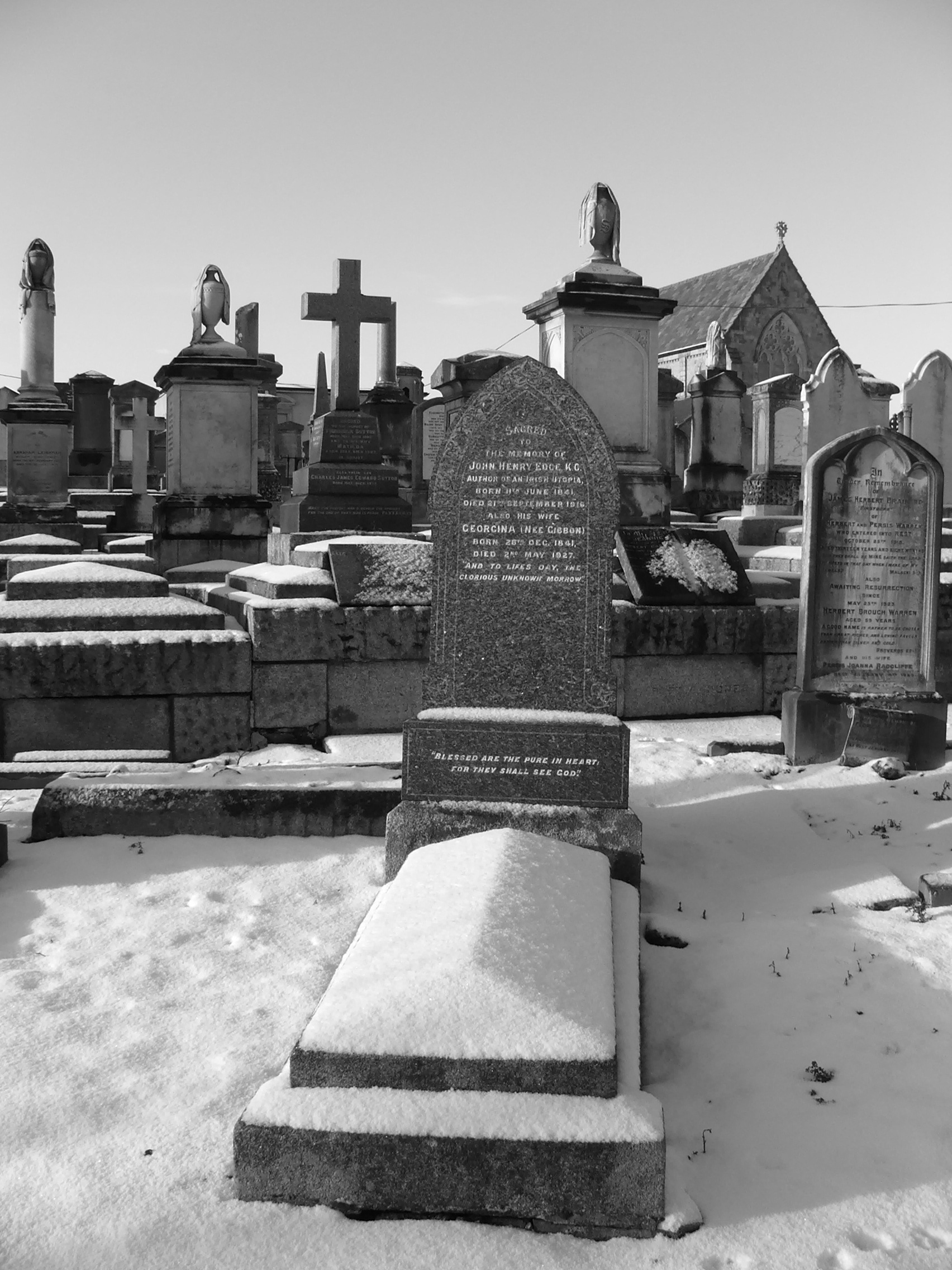 John Henry Edge (1841‒1916) was the grandson of John Edge who was a manager of the Newtown colliery for the Grand Canal Company, and who later took on the leasehold of the mine himself, leased other mines, and was a land agent. John Henry spent part of his childhood in Clonbrock House, on the very southern edge of Laois, and part in Wicklow. John Henry became a novelist late in life and published two novels An Irish Utopia and The Quicksands of Life in 1906 and 1908 respectively.  He also left us a paper entitled ‘My Recollections of Old Times’ which was read to the Literary Society of the Parish of St. Bartholomew, Dublin, on the 16th of November 1914.[1] The parish of St. Bartholomew is a Church of Ireland parish centred on Ballsbridge. His reminiscences can tell us something of how their times appeared to some of the people living in 1914, as well as something of the social history of the nineteenth-century.

To understand the past there are many things to bear in mind, and among them is the fact that the frame of reference for people in the past was the years and decades of their past. So when faced with a food supply crisis in 1917 and 1918 the resonance of the rhetorical invocation of the memory of Black 47 was partly because it actually was living memory – it had happened 70 years previous and so there were still people around who could remember it. Likewise, we have to suspend something of our knowledge of their future, what people expected in 1914 might seem naïve, or even unbelievable, when you know what happened in 1922, but in 1914 no one knew what would be happening in 1922. All this might seem obvious but it is easy to forget.

Edge’s recollections offer us some insight into these processes, he was old enough in 1914 to remember the 1840s and 1850s. Part of his context for understanding the new war in Europe in 1914 was the Crimean War of 1853‒56. He remembered:

I saw the Cameron Highlanders embarking at Kingstown Jetty for the Crimea. They were splendid-looking men, averaging well over middle height, none of them boys; I noticed that most of them were deeply pitted with the smallpox. They did not wear any special war uniform like khaki, just their red coats, kilts, and tartans. The officers, as the boat moved off, sang sweetly “Fare thee well, my own Mary Anne.”  I used to read Russell’s accounts of the privations of our soldiers in the trenches before Sebastopol, just as I now do about the sufferings of our brave men in France and Belgium. We all then dreaded the three terrible Russian Generals, January, February and March. Let us now hope that the campaigns of ourselves and our allies will be in Germany, and not in Russia, France, or Belgium, during the coming winter.[2]

As it happened all of the combat that was going to happen in Germany was over by then, in the form of the defeated Russian invasion of August 1914. He went on:

One very hopeful feature in connexion with the present war is the way in which it has knit the various peoples and races of our Empire so closely together. The change in India is most remarkable. Its races are now anxious not merely to give us good words, but also to help us with the substantial assistance of brave soldiers and ready money. This is a cheering contrast to the fearful Indian mutiny which succeeded the Crimean War.[3]

Of course we know now that in the wake of the world war would come reverberations of rebellion across the Empire, most especially in India, something which makes his confident hopes seem misplaced.  It is interesting how rhetorically central India was– similarly when Prime Minister Asquith addressed a recruiting meeting at the Mansion House, Dublin, on the 25th of September 1914, great cheers greeted the news that the same day the first units of Indian Army had landed at Marseille.[4]

Unsurprisingly, given the foregoing, a local history publication describes John Henry Edge as a committed loyalist.[5] However, his contextualisation of the Famine in a digression in his An Irish Utopia novel reads very nationalist.[6] Perhaps, we might think, because nationalism had become very pervasive by then, or perhaps because nationalism actually drew on ideas and themes from liberal unionism – as in, for instance, the influence of William Edward Hartpole Lecky’s History of Ireland in the eighteenth century. Lecky, incidentally, belonged to the family the Edges leased Newtown, Clonbrock and other properties from. Similarly, though predating ‘unionist’ and ‘nationalist’ in any modern sense, it seems surprising that the first screed against absentee landlordism came from the pen of Rathdowney man, and Dublin Society founder, Thomas Prior. In any case while telling us “no description of” the “harrowing” Famine “however realistic and vivid, can equal the recollections of one who witnessed it even as a young child” unfortunately he shares no such recollection there, which perhaps speaks to their harrowing nature.[7] In a preface to a later edition he does include one vignette:

I vividly remember one morning in the height of the distress following my grandfather to the door of his house and seeing him hold up his hands in protest at the great numbers of men and women who were crowded about the front of the house, waiting for his alms. I then hear him thunder out in his far-carrying voice: “Go to the Relieving Officer,” and saw him walk stoutly through the throng to his gig and drive away. My mother was present and exclaimed indignantly: “He is a hard-hearted old man.”[8]

Speaking of India, and of famine, John Henry Edge’s cousin, contemporary and confusingly namesake, Sir John Edge, was Chief Justice of the High Court of North Western Provinces of British India in Allahabad (1886-1898), Vice-Chancellor of the university there, and head of the famine relief committee in 1896.

John Henry Edge gives us some great insight into the social history of transport in the mid-nineteenth century. Among of his earliest memories was of a journey by canal:

One of the first things I can distinctly recall is a journey from Portobello Harbour to Athy, fifty English miles, in a canal boat. I well remember the horn lugubriously sounding our departure in the green-painted boat, which then became and still is, despite all I have read about it, my idea of what Noah’s Ark must have been like. I went by a fly boat, which corresponded to an express train of to-day. Unless when stopped by the locks, relays of horses galloped the whole way hauling the boat and the passage only took seven hours. The journey was to me, a child of six years old, very wearisome. I can still almost feel the boat sinking down in the locks. For grown-up folk, who were not in a hurry – and few hurried seventy years ago — this mode of travelling was pleasant enough. Talking, reading, writing, eating and drinking could be more easily and more comfortably carried on in a canal boat than in a railway train or steamer ; and the fares were very moderate.[9]

Another interesting transport-related anecdote concerns the presence of sedan chairs in Dublin in the mid-nineteenth century – sedan chairs are covered cabins carried on poles.  He also had something to tell us of railway pioneer William Dargan, sponsor of the 1853 Great Industrial Exhibition, which John Henry was taken to by his grandfather John Edge. He claimed that John Edge actually gave William Dargan his first start, in employing him to construct a house on Colonel Rochfort’s Clogrennan estate, where John Edge was the agent. Of course William Dargan was a legendary figure, so perhaps this was a legendary claim.