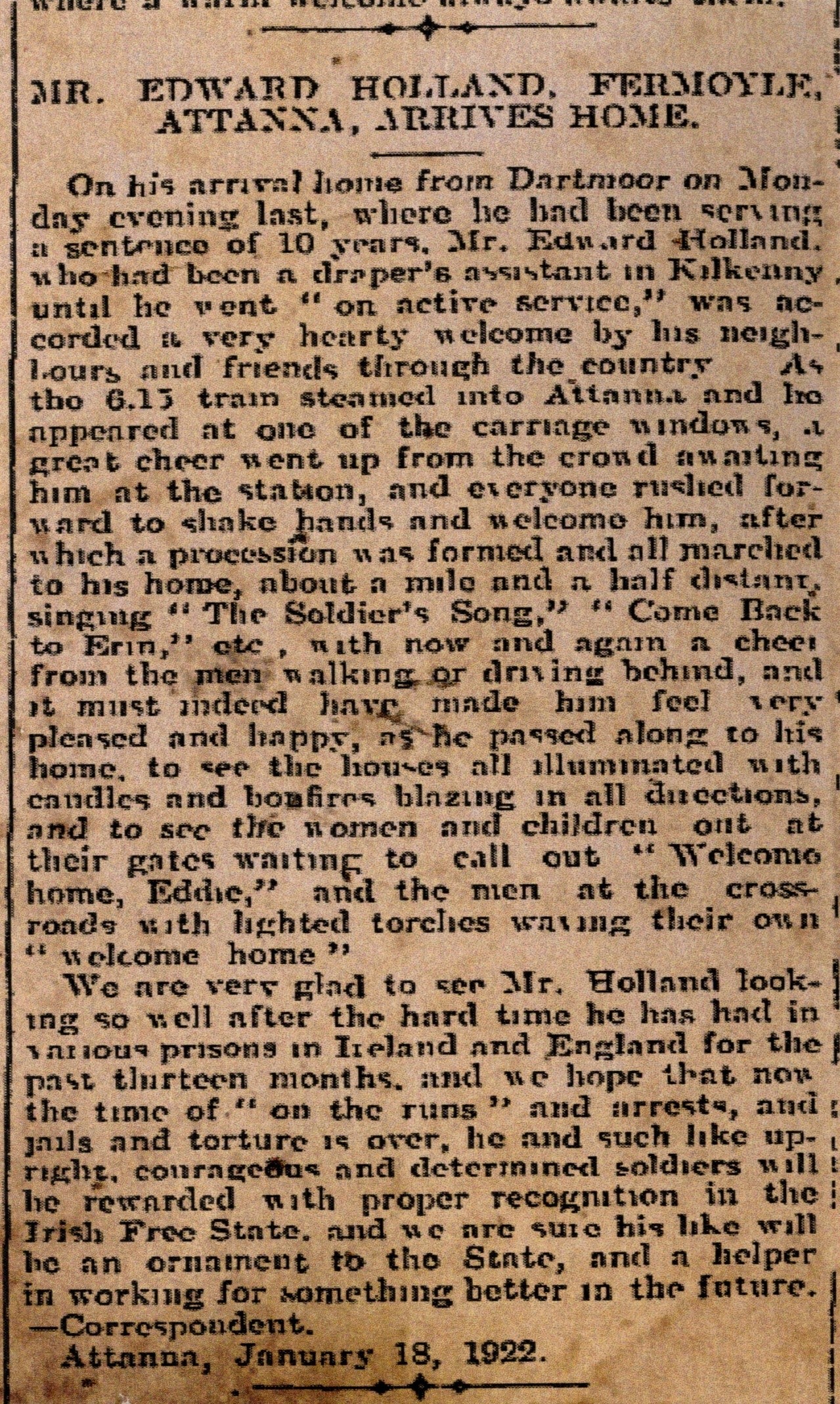 The newspaper article featured above was published in the Kilkenny People and describes an event that took place one hundred years ago yesterday. I discovered it when researching my family history and it provided the inspiration and clues to learn more about the revolutionary activities of Edward Holland, my paternal granduncle. Edward, known by family as Ned, was born on the 19th September 1896 on a small farm in Fermoyle, near Durrow, County Laois. He was the eldest son of Kyran Holland and Margaret Foley[1] and the older brother of my grandfather Tom Holland.

The article captures a moment in time following the signing of the Anglo-Irish Treaty and preceding the outbreak of the Irish Civil War. The piece is a very descriptive and atmospheric account of the welcome Ned received locally following his release from Dartmoor Prison. I knew that my granduncle was involved in the Irish War of Independence but was not aware of the extent or details of his involvement.

The article begins by announcing that Edward Holland had arrived home to Fermoyle from Dartmoor, where he was serving a sentence of 10 years. It provides some additional background, stating that he was ‘a drapers assistant in Kilkenny’ until he went ‘on active service’.  A large part of the article consists of a description of the ‘very hearty welcome’ he received from his ‘neighbours and friends throughout the country’. It describes the cheering crowds that greeted Ned at the Attanagh Railway Station and the torch lit procession that escorted him to his family home.

Ned’s imprisonment in Dartmoor and the length of his sentence suggested he had played more of a role in the armed struggle than I had suspected. I decided to search the Bureau of Military History Statements, held in the Military Archives, and now online.[2] The Bureau of Military History was established in 1947 to construct an archive for the revolutionary period from 1913 to 1921. The collection contains 1773 statements made by people involved in the nationalist struggle, from the build up to the 1916 Rising to the conclusion of the Irish War of Independence.[3] Ned was not among those who made a statement, but that the incident that led to his arrest and imprisonment was outlined in the statements of others involved.

There were four statements that described the incident that led to the arrest of Ned and others. The statements were made by members of the Kilkenny Brigade, being John Walsh [4], Martin Cassidy[5], Michael O’Carroll[6] and Timothy Hennessy[7]. All four refer to a plan to capture the Auxiliary headquarters based in Woodstock House, on the edge of Inistiogue. Ernie O’Malley, G.H.Q. Officer, was sent from Dublin to Kilkenny to organise the attack. At a meeting with the Kilkenny Brigade held in late November, O’Malley requested a guide, as he was unfamiliar with the area. Timothy Hennessy stated ‘On the following day I sent to Ballyouskill for a Volunteer named Edward Holland, who was on the run, and whom I considered to be a most suitable man, to accompany O’Malley.’[8]   The statements concur that the two men went to the house of James O’Hanrahan, 5th Battalion O.C., Kilkenny Brigade, who lived just a few miles from Woodstock. The men spent the evening studying maps of the district and making plans. The following morning the house was raided by the Auxiliaries and the men, who were armed, were arrested and taken to Woodstock.

The details of the raid were not outlined in the statements taken by the Bureau of Military History, but I found accounts of the arrest, court martial and imprisonment of the men reported in local and national newspapers. In an article on the court-martial of James O’Hanrahan, for harbouring Edward Holland and Ernie O’Malley, the scene of the arrest was described by a member of the Auxiliary search party. His evidence is reported in the newspaper as follows:

Arriving at Hanrahan’s they found three men in a front room having breakfast. When questioned one of them said he was James Hanrahan … The other said he was Bernard Stewart and came to see his aunt who was sick upstairs; and a third man, Edward Holland, said he was there for two or three days holiday.[9]

Interestingly, the authorities failed to discover the identity of O’Malley and his arrest was processed under the false name he gave at the time of his arrest. The account describes how O’Malley attempted to pull a gun but was knocked down by the witness. In his pocket they found

Ned was court-martialed in Waterford. An article appearing in the Kilkenny People describes the court-martial in detail. According to the article ‘Edward Holland, Draper’s Assistant, Kilkenny, was at a Field General Court Martial at Waterford on Saturday, charged with contravening Regulation 9 A.A. of the R.O.I.R., with which is incorporated D.O.R.A.’[11] Ned was found guilty on three charges and sentenced to ten years’ penal servitude.

The original newspaper cutting I discovered stated that Ned had served thirteen months in various prisons. To find out more about this part of Ned’s story I consulted the Irish Prison Registers collection. The original records are held by the National Archives of Ireland, but I consulted the digital copies available online.[12] Ned was registered in Mountjoy Prison on 22 December 1920,[13] twelve days after his arrest. He also appears on a list of prisoners held in Waterford in 1921,[14] presumably during his court-martial, which did not take place until 23rd April. The original article in the newspaper cutting referred to Ned being in ‘various prisons in Ireland and England’, but I found no evidence of him being detained in prisons other than the ones I have already mentioned.

Ernie O’Malley continued to play a leading role in the Irish War of Independence, having dramatically escaped from Kilmainham Gaol in mid February 1921.[15] Later, he would join the hard-line Republicans and reject the Anglo-Irish Treaty. In 1936 he published On another man’s wound, an account of his experiences from 1916 to 1921. My father informed me that he had read the book as a young man and recalled a mention of Uncle Ned. To my delight I discovered that O’Malley had written, not only a description of his arrest in Inistiogue, but an account of the days that followed. O’Malley’s book was an extremely important source. It accounted for the days between Ned’s arrest in Inistiogue and his registration in Mountjoy. It provided details of his treatment by the Auxiliaries, RIC, Black & Tans and Dublin Castle. But most importantly, it provided an insight into the minds of the two young men and highlighted the human side of the story.

O’Malley describes how he and Ned were blindfolded, handcuffed and transported to Woodstock House in Inistiogue. They were thrown in a dark and cold cellar, where they were verbally abused. O’Malley was taken out and interrogated, violently treated and threatened with shooting.[16] I took some consolation in O’Malley’s account, which seemed to suggest that Ned was not as violently treated as he was at this point. However, it is possible that O’Malley didn’t recall or represent the events accurately. Either way, the two men spent that awful night believing they would be shot at dawn. O’Malley describes the bleak night as follows:

Time passed slowly in the cold darkness. We did not talk. Each was thinking his own thoughts. Had they found the percussion grenades, what had they done to the O’Hanrahans and their house?[17]

The next morning, they were taken to the military barracks in Kilkenny and handed over to ‘the Royal Irish and the Tans.’[18] They were transported to Dublin the following day, initially to Beggars Bush Barracks and then to Dublin Castle. O’Malley remained in Dublin Castle until early January, when he was moved to Kilmainham Gaol. The account doesn’t mention when Ned was moved, but as he was registered in Mountjoy on the 22nd December 1920, it seems he spent several days in Dublin Castle. To date I’ve been unsuccessful in discovering when Ned was sent to Dartmoor.

The first paragraph of the original article was vital, as it provided me with details I could verify and further explore through research. However, the second paragraph talked about the future and posed more questions than it answered. The article was written in January 1922, a time between the end of the Irish War of Independence and the beginning of the Irish Civil War. The correspondent expresses the hope ‘that now the time of “on the runs” and arrests, and jails and torture is over.’ Sadly, we know that this was not the case.

I knew from my family that Ned had fought in the Irish Civil War on the pro-treaty side. I emailed the Military Archives to request some details. The reply received from the Duty Archivist confirmed that Edward Holland had ‘served in the National Army as a Lieutenant in Kilkenny Brigade and later Waterford Command with 47th Infantry Battalion from May 1922 until March 1924, when he was demobilised.’ Ned married Mary Dowling on 16 August 1926,[19] and had four children. He joined the Irish Prison Service, serving initially in Portlaoise Prison and later in Sligo Prison. ‘He retired with the rank of Assistant Governor when Sligo Prison closed in the late 1950s.’[20]He died on 26 October 1983.[21]

If like me, you have an ancestor who was involved in the revolutionary struggle, you can research their activities by accessing a large amount of records held in archives and now online. The Military Archives has digitised large collections, from the witness statements previously mentioned, to pension applications of the men and women involved. Newspapers, local and national, contain a vast amount of information on revolutionary activities and often printed accounts of trials or court-martials. Local publications, such as Michael Rafter’s meticulously researched The quiet county: towards a history of the Laois Brigade I.R.A. and revolutionary activity in the county 1913-1923, provide an excellent source of information on the revolutionary period in specific localities. Publications on neighbouring counties can also hold references to Laois people, as in the case of Edward Holland, whose story is captured within the Kilkenny histories. Access to archived newspapers is available through Laois County Library, as are all other publications referred to in this article.

Dorgan, Dermot, The chapel district of Ballyouskill, Attanagh : the history and people of a community on the Kilkenny-Laois border, (Kilkenny, 1996)

[4] Bureau of Military History, Witness Statement of John Walsh (No. 966)

[5] Bureau of Military History, Witness Statement of Martin Cassidy (No. 1101)

[6] Bureau of Military History, Witness Statement of Michael O’Carroll (No. 1609)

[7] Bureau of Military History Witness Statement of Timothy Hennessy (No. 1614)

[20] Dermot Dorgan, The chapel district of Ballyouskill, Attanagh : the history and people of a community on the Kilkenny-Laois border, (Kilkenny, 1996), 360