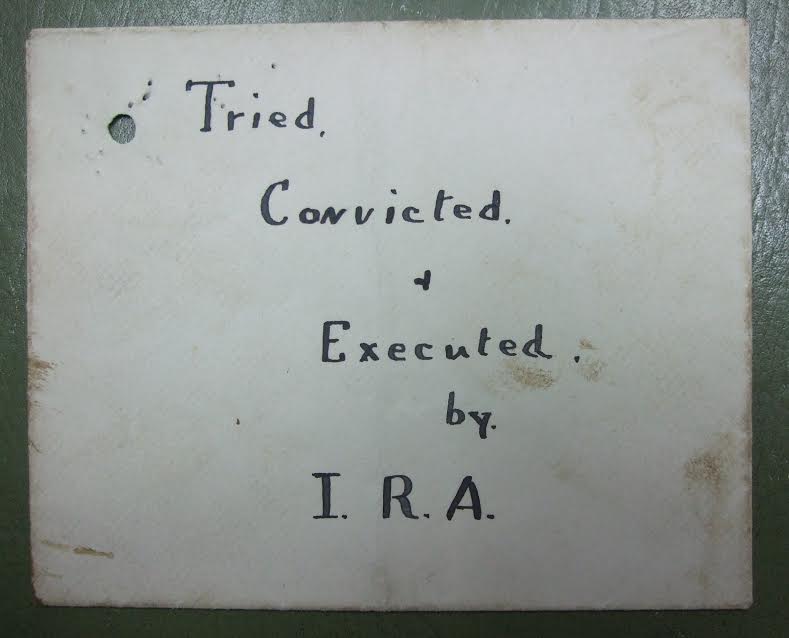 On the 2nd of July 1921 Andrew Johnstone (sometimes given as Johnson), was shot dead in Oola on the borders of Tipperary and Limerick. The Nationalist and Leinster Times reported “in his young days Andy was a noted hurler in the ranks of St. Fintan minor team in Mountrath Monastery”.[1] Mountrath Monastery was the Patrician Brothers’ school. He was also “well known in County Carlow”. Johnson (or Johnstone) had only that year been promoted to sergeant in the ranks of the Royal Irish Constabulary (R.I.C.), before his fatal encounter with the Active Service Unit of the Tipperary No. 3 Brigade, Irish Republican Army.[2]

In the papers at the time of the Truce we can also read of the sentencing to twenty years penal servitude of the man who “trained the Ballyroan County Champion Football team some years ago”.[3] Jim Hunt had a convoluted biography across the revolutionary years — he joined the Royal Irish Constabulary (R.I.C.) in 1911, and left after the Easter Rising in 1916 — signing-up with the Irish Volunteers towards the end of that year.[4] Ballyroan won the Laois club championship in 1914, 1915 and 1917.[5] Hunt was Munster Handball Champion – a trophy he won in 1915 while resident in Cork.[6] Likely then it was in 1917 he was training the Ballyroan team. Incidentally prominent republicans Lar and Tom Brady played for the club.[7] Hunt resigned the champion title by 1920, as he was back living in his native County Sligo.[8]

He had a busy time in Sligo, from 1919 onwards Jim Hunt was O/C of the Gurteen Battalion, Irish Republican Army, located in the south-east of the county, bordering Roscommon. Hunt was involved in the Ratra ambush of a group of R.I.C. on the 1st of September 1920 and an attack on Collooney R.I.C. barracks on the 20th of March 1921. He seems to have been quite the athlete – his capture was proceeded by a cross-country race enlivened with target shooting, in which Hunt, having run out of ammunition, eventually had to concede to the one pursuer who could keep up with him.[9]

It is curious how he managed to become Munster Handball Champion while Rule 21 was in force — the rule which precluded members of the British armed forces or police from joining the Gaelic Athletic Association. That was introduced in 1897, previously a serving R.I.C. District Inspector, Thomas St George McCarthy, was actually one of the founders of the G.A.A..

According to historian Charles Townshend, in 1921 “as many Volunteer units became alarmed at the apparent seepage of information to the Crown forces, a neurosis about ‘spies and informers’ spread across the organization.”[10]

On the 5th of July 1921, in the early hours of the morning, Peter Keys (sometimes Keyes) was shot dead at Rushin, near Mountrath. This was reported obliquely “he incurred displeasure amongst his neighbours by consorting with unpopular people, and it is believed this led to this death”.[11] Keys “was a constant exhibitor at the County Shows and won prizes for fowl, vegetables, etc.”. 50-year-old Keys had ten children, six of whom still lived with him and his wife Catherine. They resided in a new four-roomed labourers’ cottage, a step-up from the two rooms the family occupied on Shannon Street at the time of the 1901 census. Shortly after two in the morning on the 5th of July seven masked men descended on the cottage. Three kept Catherine and the children in one room, while four took Peter outside. There were three shots. In the Military Service Pensions Collection it is claimed 26 people in total were actually involved in the slaying.[12]

Keys was a farm labourer and the secretary of the Mountrath Land and Labour Association — one of the local unions most of which, by this stage, would have been absorbed into the Transport Union. According to the background given at the court of inquiry into his death Catherine Keys took in washing from the R.I.C. and was boycotted in response.[13]

Early in 1921 it was evident that “spies” were active in the area. In Mountrath one particular man was openly collaborating with the enemy. A meeting was held in Peafield attended by the Brigade Vice O/C., Thomas Brady; Lar Brady, Adjutant; myself and the Battalion Adjutant; also I.R.A. men from Killanure and Mountrath with reports against the spy. After consideration of the reports it was ordered to have the spy executed. The order was duly carried out. (The name of the spy was Peter Keyes, Rushin Road, Mountrath, but it is not for publication).[14]

Townshend argued that “the most careful historical analysis strongly suggests that a large proportion of those killed as spies did not give information to the authorities. They had fallen foul of the republicans for other reasons.”[15] More research has been done since then, with findings that have it that while victims were in fact suspected of espionage, a substantial minority were indeed innocent. Analysis of the Cork deaths — and with 71 fatalities Cork accounts for by far the largest share of killings of suspected informers — found the dead were mostly working-class and mostly from the poorer end of income stratification. There was a disparity between social status of suspects in general and the social status of those suspects who were executed — plainly the poorer you were the greater your chances of being shot. Ex-soldiers made-up a large proportion of the dead (former Crown Forces in general constituted 56% of the total death toll), ex-soldiers also made up a disproportionate share of the contemporary unemployed.[16] It is not necessarily a case of either/or between social prejudice and genuine suspicion, since we know from more conventional police and judiciary that social prejudice shapes genuine suspicion. On the other hand, financial inducement was a Crown Forces’ tactic to collect information and obviously the more impoverished your circumstances the more attractive, or even necessary, that money would be.

Certainly it would be reasonable to hold that Catherine and Peter Keyes; Denis Lenihan, whom we shall get to in a future article; and John Poynton, of whom more below, were hardly possessors of high-grade intelligence on the inner workings of the Republican movement. In the Keyes and Lenihan cases they seem more people who maintained working and business relations with the Crown Forces. For sure such people could potentially be the conduits of gossip and rumour along with knowledge of anything that occurred in public view.

Death was not necessarily the sentence, also in the news in the last week of the Tan war was this:

During the early hours of Sunday morning, Patrick Rourke, of Clonmore, Killeshin, was taken from his home by four masked and armed men, and was later found tied to the chapel gate, with a placard on his neck bearing the words: “Convicted for aiding the enemy. — I.R.A.”[17]

Another suspected informer, John Poynton, was shot dead on the morning of the 11th of July 1921. Poynton, a 23-year old farmer of Kilbride, Portarlington, had very briefly been in the R.I.C. in 1920 before resigning and returning to the family farm upon the unexpected death of his father (who had also been in the R.I.C.). Poynton, at least according I.R.A. claims, had been meeting police patrols at night, was something of a loud-mouth and had refused to leave the area.[18] Two of Poynton’s six assailants went on to join An Garda Síochána.[19]

A lot of basically disciplinary violence carried out by the I.R.A. harkens back to the nineteenth-century. Once a matter of intimidation, assault, arson or even assassination inflicted on whomsoever paid their tithe or rent or took land from which another had been evicted. Now the same repertoire was deployed in an anti-state insurgency and punishment inflicted on whomsoever continued to truck or consort with the Crown Forces in defiance of the ordered boycott. It is worth noting that only a tiny handful of I.R.A. members were ever shot as informers — the pool of selected victims seems to have been in significant part from those “openly collaborating with the enemy”.[20]

Forces of Law and Order?

Of course it was hardly just the underground government and the underground army who were dishing out violence and threat. In the same newspaper issue as the foregoing we can read of the treatment of non-combatant prisoners in Maryboro’ military barracks.[21] On the morning of June 25th 1921 Thos. Tynan of Ballybrittas and J. and D. Roche of Monasterevan were suspended by their wrists from a gate in the barracks and told they would be kept there and starved until they submitted. Their crime? They refused to chop wood when ordered to by the military. Presumably the wood in question was a tree felled to block a road — an I.R.A. tactic, which, while disarmingly pedestrian, was extremely efficient at paralysing the road network. Fortunately, the intervention of a clergyman brought an end to Tynan and the Roches’ predicament.

Also detailed were various arrests and imprisonments in the Wolfhill district.[22] Recently rounded-up were three colliery workers – Frank Egan, Perey Hurley and Rex. Hurley. They were imprisoned in Portlaoise jail. Earlier Joe Hyland, a member of the Athy No. 2 Rural District Council (which administered the south-east of Laois), was arrested at his home in Coolglass, Wolfhill. He had been a wanted man for some time and was imprisoned in Rath Camp in the Curragh. Similarly, there were extensive R.I.C. raids in the Ballylynan district in the 24 hours before the Truce.

There was a more unusual news story from Wolfhill concerning the “employment of a supposed expelled worker”.[23] Seemingly a man named Torpey gained a position as an electrician in the colliery under the false pretence he was an “expelled worker” – that is to say one from among the hundreds of left-wing Protestants and thousands of Catholics driven from their Belfast workplaces by loyalist violence. Torpey brought his family with him, and, when it eventually transpired he was in fact not an expellee, or at least it was alleged he was not, there was ill-feeling and altercations between the Torpeys and some of the neighbours – particularly the immediate neighbours the Dwyers. Reportedly: “The Torpey party produced revolvers, and the Dwyer party used their fists.” Then the police arrived from Modubeagh — presumably the Irish Republican police —  and intervened quelling the row. What the local newspaper report called “a satisfactory ending to what might have ended in tragedy” was brought about by the Irish Transport and General Workers’ Union organising the removal of the Torpeys from the area.

This has been a more violence-focused article than others in this series. It was certainly the case that there was an increasing tempo of violence up to the Truce on Monday, the 11th of July, 1921. But the focus is by design. History is the questions we ask of the past not an unfiltered presentation of the past —it exists in our present. We could ask other questions and find other material in the news from the middle of July 1921. Contemporary environmental concerns might interest us more in the long summer drought experienced in 1921 and the discussion of a possible “water famine”.[24] As always with such weather people were taking to the waterways. On the very same pages as the foregoing tales of imprisonment, torture and violent death we can learn of the “very refreshing” swimming at Lady’s Bridge on the De Vesci demesne where “a good strong current . . .provides a pleasant sensation for the summer.”[25] But that’s not just a quirky frivolity at the end of the news. Reading between the lines reveals something of deference, paternalism and their downfall: “bathing is once again allowed . . . by the kindness of Lord de Vesci” but the newspaper also cautions on the need to “observe the direction on the notices which have been erected” regarding staying on designated paths and not interfering with shrubbery —the implication, of course, is that behaviour on the demesne had become unruly. Even the most innocuous activities could reveal deep-rooted social fractures.

[20] There is a breakdown of the numbers in: Pádraig Óg Ó Ruairc ‘‘Spies and informers beware!’: IRA executions of alleged civilian spies during the War of Independence 1919 -1921’, The Irish Story, https://www.theirishstory.com/2017/06/04/spies-and-informers-beware-ira-executions-of-alleged-civilian-spies-during-the-war-of-independence-1919-1921/#.Y4CD5-HP1y1