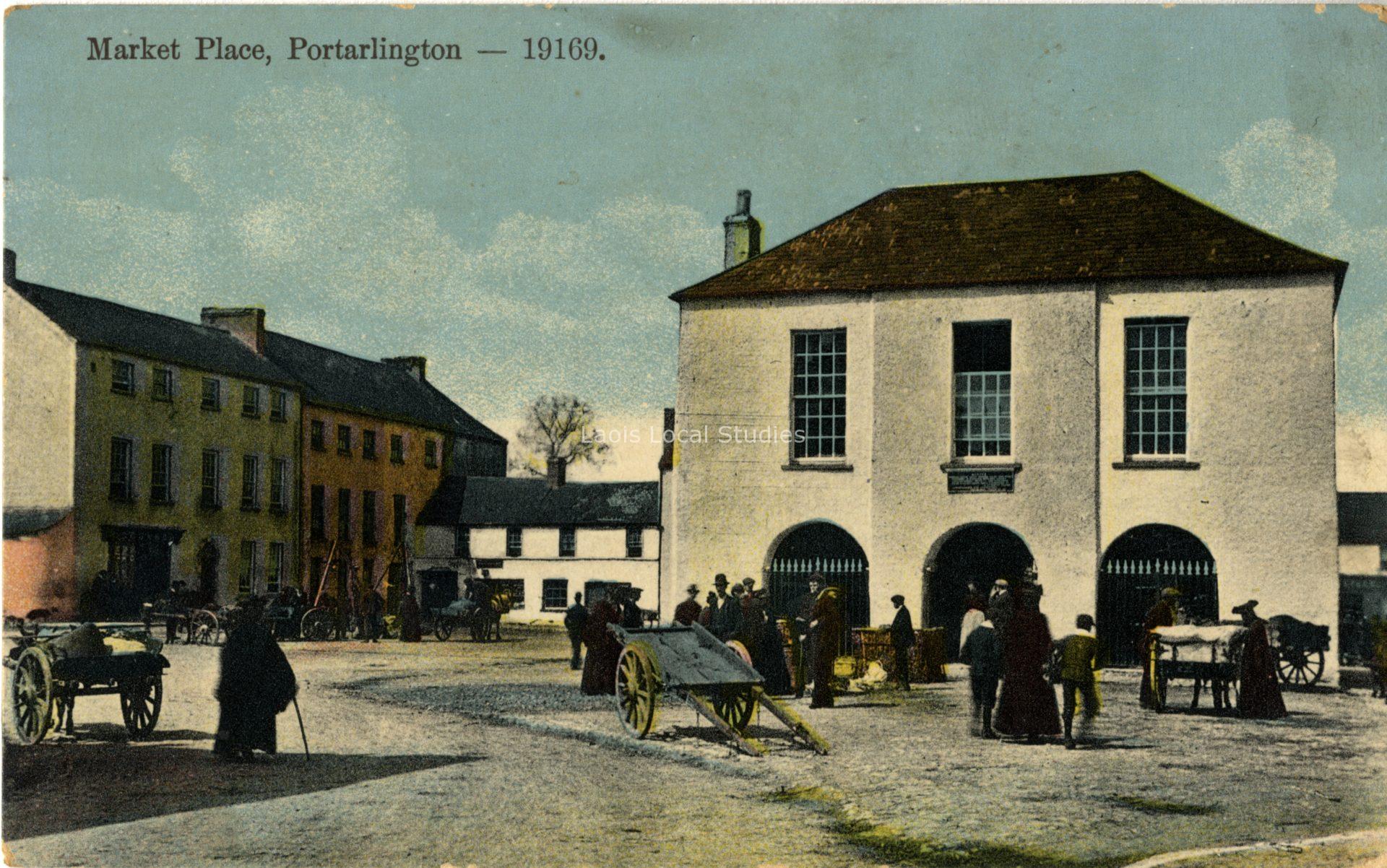 The Portarlington Sawmills Lockout of 1918

This article is an extract from a forthcoming chapter on the labour movement in Laois which will appear in a collection of essays to be published by Umiskin Press on the provincial working-class experience of the Irish revolution.

The ITGWU, or Transport Union as it was known, expanded both through local initiatives and the efforts of full-time regional Organisers. One such Organiser was John Dowling.[i] Cóbh native Dowling had been a fitter at the Haulbowline Naval Dockyard, but he was excluded from his home area in 1915 under the Defence of the Realm Act. In late 1917, Dowling was working as an ITGWU Organiser in the Midlands and established branches of the union in Tullamore and Portarlington. These were the first inland branches in the ITGWU’s great expansion from 1917 onwards. That is to say, these were the first branches outside the port towns and cities and their immediate hinterlands. The Transport Union was originally an offshoot of the Liverpool-based National Union of Dock Labourers and dock and port workers were a crucial part of its early history. Tullamore became branch number 19 and Portarlington branch number 20.[ii]  There may have been one earlier inland branch, in Kilkenny, but it appears to have not lasted.[iii] The Russell Brothers’ sawmills was one of the key workplaces in Portarlington organised by Dowling. A membership census dating from 30 June 1918 has 178 members in the Portarlington branch, the largest number working in timber mills – sixty-five – with thirty-four in corn or flour mills. The other large category was general labourers, fifty-four.[iv]

In a matter of weeks after their enrolment into the ITGWU, management at the Russell Brothers’ sawmills gave their employees the choice of repudiating their union or being denied work. A lockout began on 6 December 1917 after two weeks’ warning. It would run long into 1918.[v] On 18 January 1918, John Dowling was assaulted and arrested by the Royal Irish Constabulary on the streets of Portarlington. This was not actually arising from the lockout but under an arrest warrant from Killorglin, County Kerry. During the previous summer, Dowling had been charged under the Defence of the Realm Act after answering a constable’s questioning only in Irish. On the same day, in January 1918, a number of pickets were arrested and bound to the peace at a special court sitting that evening. Before the bench were John Dowling, James Muldowney, Michael Kelly and Patrick Scully.[vi] Dowling was imprisoned in Mountjoy Gaol and released after going on hunger strike and being subject to forced feeding.

In a test case tribunal in the middle of February, the Russell company was found to have acted illegally in dismissing workers who were engaged in essential war work. There was a portable Government mill as part of the mill complex — and some of the production was for military purposes. In fact, while outputs included stretcher poles for the Front, a much greater range of products were being made including bobbins for textile production, railway sleepers, boxes for the export of horse shoes, egg boxes and furniture. The company was fined and the fines went as compensation to the dismissed workers although the amounts were derisory — less than a week’s wages.[vii] R.G.H. Russell at the tribunal in February 1918 stated he was not opposed to trade unionism, but that the Transport Union had the character of a ‘political organisation’.[viii] While this was obviously self-serving evidence, it would be fair to say that the Transport Union then, with its espousal of sympathetic action, and at least partial adherence to social revolutionary goals, was not just a normal trade union.

At the beginning of March, the Nationalist newspaper reported on a visit from separatist leader Constance Markievicz. She delivered a lecture in the Town Hall, Portarlington, on Wednesday night, 20 February, ‘at an entertainment organised in aid of the victims of the lockout at Russell Brothers’ Sawmills’. The lecture was ‘preceded by the stirring drama Ireland First and followed by a concert, Irish in spirit from first to last’.  The Countess ‘gave a thrilling account of her experience in Easter Week and aroused the enthusiasm of the audience to a high pitch’. In the streets, before and after the entertainment, there were processions headed by the Tullamore and Killenard Pipers’ Bands. The lockout fund of the Portarlington Transport Workers’ Union was boosted by £30 ‘but the moral effect of the proceedings in general will prove of even greater service to the cause of the workers’.[ix] Earlier that day Markievicz, addressed the Transport Union workers at the picket-lines outside the sawmills. She received an enthusiastic response, despite the attempt by management to drown out her voice by sounding klaxons.[x]

While Markievicz is better known today, at the time Dowling was also a nationally significant figure. Both Markievicz’s speech about the Easter Rising and Dowling’s insistence on answering the RIC in Irish, illustrate how advanced nationalism and labour radicalism mixed together. While this was sometimes the case, also found within the labour movement were ex-followers of the Irish Parliamentary Party (IPP) or ‘Home Rule’ Party, and even ex-British soldiers initially hostile to Republicanism.[xi] For instance, P.J. Meehan, who was Labour candidate William Davin’s Election Agent in the 1922 General Election had himself previously been IPP MP for Queen’s County Leix from 1913 to 1918.[xii]

In the middle of June 1918, the Leinster Express reported that the sawmill workers were going back to work on their employers’ terms.[xiv] If this was true, the lockout certainly did not have a disastrous impact on the ITGWU locally. By 1928, Portarlington was one of the seven branches remaining in Laois from the twenty-one which existed during the revolutionary years.[xv] Desmond Greaves argued that the lockout had the ‘unintended effect of arousing interest in trade unionism in three counties’.[xvi] Namely, Laois, and the two counties adjacent to Portarlington, that is, Kildare and Offaly.  It was then part of the process by which local or county-wide associations of agricultural workers affiliated to the ITGWU. A process which would take a dramatic form in Kildare in the following year, 1919, in the form of the Meath and Kildare farm labour strike.[xvii]  That strike itself influenced wage negotiations and the course of trade unionism over county borders, including in Laois.

Game-keeping: A later visit of Constance Markievicz Another visit of Constance Markievicz to Laois illustrates the similarity between Sinn Féin and both earlier and later political parties.  In previous decades the ‘Home Rule’ party would support tenant-farmer protests when negotiations with London over nationalist demands had broken down, and spurn those protests when it wanted good relations with the government.  In more recent years we are of course familiar with the procedure by which a party in opposition supports extra-parliamentary mobilisation and does the exact opposite when it is in power.  So it was with Sinn Féin and Markievicz’s visit to Laois in the winter of 1921 saw her claim: ‘during the truce there was the danger of quarrels amongst them. As Minister of Labour she should allude to the troubles between workers and employers.’ With rich unintended irony she employed similar rhetoric in 1921, as had been employed by Home Rulers against the Transport Union during the Dublin Lockout of 1913, the event, which, of course, today the name Markievicz is most associated. In her 1921 speech in Portlaoise the Countess argued: ‘Do not let the English people get around and try to stir up trouble. Keep your minds on the one thought and don’t give a chance to the enemy. Don’t waste your time in petty squabbles.’

[iv] ITGWU Census of Membership consisting of forms that were returned and completed starting with Arklow and ending with Youghal and are compiled in alphabetical order, NLI-WOB, Ms 13,948/120, http://catalogue.nli.ie/Record/vtls000628987/HierarchyTree[retrieved 1 February 2022].