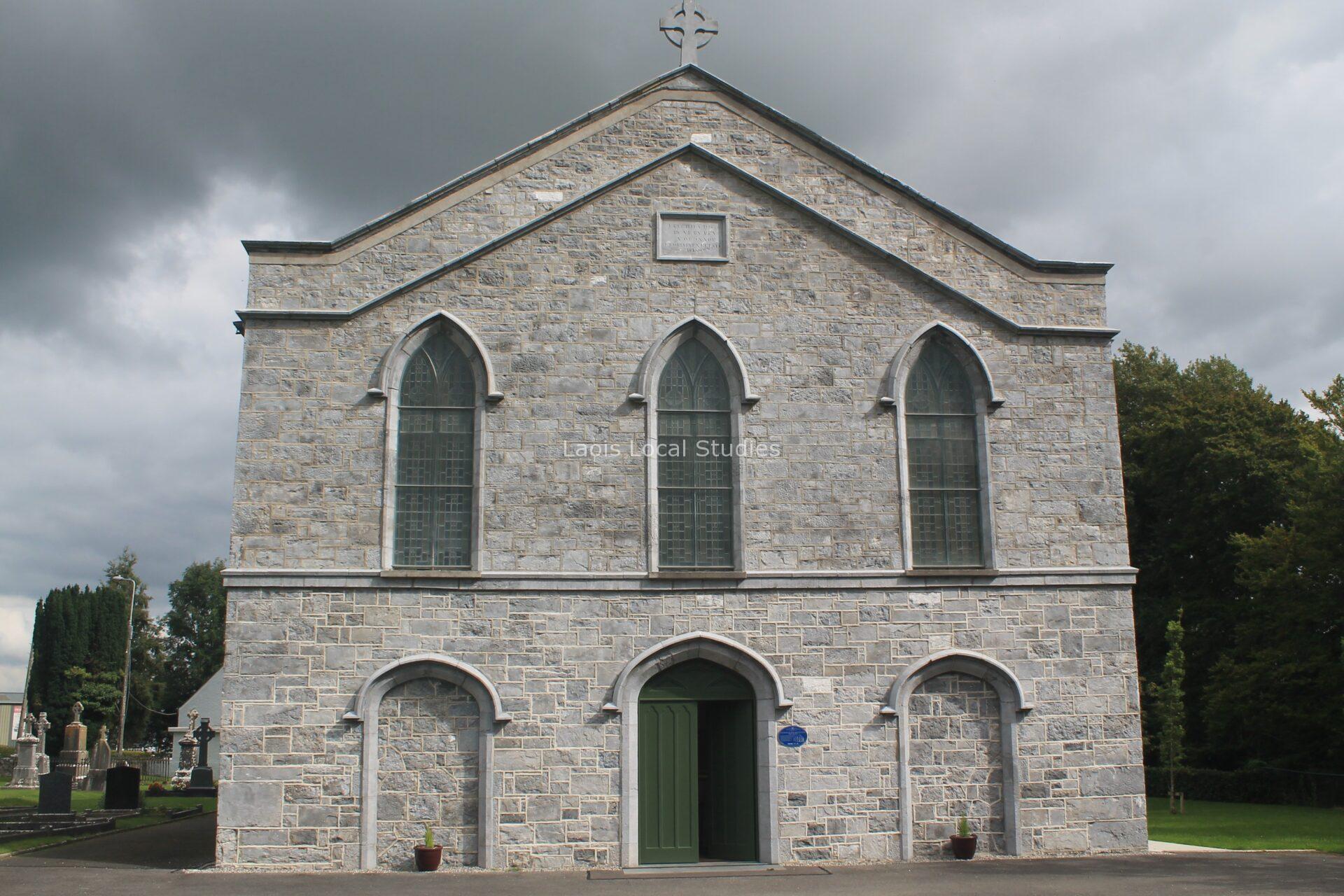 In the frontline of meeting the challenge of guerrilla insurgency was the Royal Irish Constabulary. The Dead of the Irish Revolution lists five Laois men among the fatal casualties from the ranks of the R.I.C. in the year 1921.[1]  They were John Doogue, Michael Quinn, Joseph Hughes, William Walsh and Thomas Dowling. All were Catholics and all had unremarkable pre-enlistment occupations such as farmer, labourer and postman. The militaristic image that shapes the memory of the Irish revolution distorts what was a much more diverse set of processes of mobilisation and change. That said, there was nonetheless indeed a good deal of political violence involved and this article will look at something of its nature and dynamics.  To be clear while this article will principally look at insurgent violence, there was also, of course, state violence.

John Doogue was the first to die, slain in the Glenwood Ambush in east Clare on the 24th of January 1921. He was buried in Killeshin.[2]  The last to die, Thomas Dowling, died of wounds received at the Carrowkennedy Ambush, in west Mayo, on the 2nd of June 1921.  He died two days later in Dublin. He was buried in The Heath.[3]  Both of these events are celebrated ambushes marked with roadside monuments. This is the way later decades remembered the revolution. Both Glenwood and Carrowkennedy were resounding I.R.A. successes. Interestingly in both east Clare and west Mayo ex-British soldiers, veterans of the Great War, played important roles — Joseph Clancy, ex-Royal Munster Fusilier, was Brigade Training Officer in east Clare, while in west Mayo, James Flaherty, ex-Connaught Ranger, was in the same position.[4]

In his Bureau of Military History Witness Statement Clancy itemised what he regarded as the factors that made ambushes like Glenwood less likely in his area in the months after it —lack of ammunition and larger crown forces patrols.[5] He also noted:

“I think it is only right to have it recorded, too, that the scale of the reprisals after Glenwood and the widespread terrorism employed by the enemy on the civilian population did tend, for a while at least, to curb our activities in the brigade area.”

That begs the question of what a more vicious policy of collective punishment would have achieved for the British state and what were the barriers to such a policy. Answering that question means including a broader picture of political activity in the period. A wider vista, with, for instance, the publicity campaign Padraic Fleming (and others) were working on over in the United States,[6] or the visit by British Labour Party politicians to Ireland and the report they published on so-called “reprisals”.[7]

Joseph Hughes, an R.I.C. sergeant from Wolfhill, died at the hands of an I.R.A. unit with less capacity —armed only with shotguns.[8] His patrol was fired on near St. Mary’s Catholic Church, Maynooth, Kildare, on the night of the 21st of February 1921. He and a colleague were wounded and Hughes died in the early hours of the following morning.  The prospect of retaliation was feared in Maynooth, as one would expect from the Glenwood situation, and much of the population evacuated the village in the aftermath.[9]

William Walsh died in an ambush in Modrenny, Cloughjordan, north Tipperary on the 3rd of June 1921.[10] This action was ended with I.R.A. withdrawal —their capacities shortened by factors not unlike some of those identified by Clancy for there was an unforeseen larger presence of crown forces and a fear of the arrival of reinforcements.

Michael Quinn was killed in a hotel in Belfast on January 26th 1921. Quinn was only 20 years old and a comparatively recent recruit to the R.I.C., having joined up in 1919. Quinn was the victim of the sort of close quarter assassination that actually accounts for as large, if not larger, a proportion of fatalities as the more celebrated and commemorated ambushes.[11] He was shot in his bed. More brutal, perhaps, than Glenwood, Carrowkennedy, or Maynooth, it was nonetheless daring. The I.R.A. party involved, at least according to one of their own accounts, stayed at their task after nearly accidentally revealing themselves to a crowded bar, which included R.I.C. men among the patrons, and were shooting up hotel rooms next door to a police barracks.[12] This kind of Chicago-style action didn’t necessarily sit well with the image people wanted. Roger McCorley, then Officer Commanding 1st Battalion, Belfast Brigade, digressed into how the action was in line with G.H.Q. orders in his Bureau of Military History Witness Statement. Inside information and assistance from within the ranks of the R.I.C., was according to McCorley, essential to carrying out this attack. Quinn had been engaged in guarding an I.R.A. informer who was due to testify.

The Slaying of William Vanston

In addition to these five men a further fatality was that of William Vanston, an Ulster-native, but Laois resident, who was believed to be applying for a position in the R.I.C., so he wasn’t yet actually in the R.I.C. as such.[13] William Vanston was shot in the presence of his wife as he left for work just after six in the morning. He died a short while later. This happened on the 2nd of February 1921. Vanston was a labourer in Gibneys’ maltings, which was in more recent years operated by Minch Nortons.[14] He lived on the Dublin Road, Maryborough, near to the Ridge graveyard in an area known as the Old Turnpike.[15]

The Leinster Leader reported his funeral:

“the coffin, which was wrapped in the Union Jack, being placed on a military lorry, and the widow, mother and other relatives following in a second lorry, as well as a detachment of the R.I. Fusiliers. Amongst those present—were Right Rev. Monsignor Murphy, D.D., and Rev. W. J. Willis, Rector. The interment took place at Oakvale, Stradbally.”[16]

R. I. Fusiliers means Royal Irish Fusiliers.  Vanston was a Great War veteran, though The Dead of the Irish Revolution gives his regiment as the Royal Engineers, as an Ulster veteran it would not be surprising for him to have some connection to the Ulster-based regiment the Royal Irish Fusiliers. He was also reported as having multiple familial links to the R.I.C..[17] The Catholic clergyman mentioned in the report, Monsignor Murphy, lived near where the assassination took place and made a condemnation of it.

On the morning of the 2nd of February 1921, as bullets ripped into Vanston’s body, his assassin exclaimed “You’ll never join the f—king police”.[18] The assassin however did, and included Vanston’s killing in his military service pension application while he was a serving Garda in Ballyragget station.[19] Kevin O’Higgins, then Minister of Justice, supplied a reference to the pension application.

Too much of a focus on extreme violence can give us the wrong impression. The biggest impact on the R.I.C.’s numbers was made not by deaths but by resignations. The resignations and recruitment crisis peaked in the summer of 1920 with a weekly average of fifty-two resignations compared to an average of only seven enlistments.[20]  It is likely some shooting helped influence people’s minds as to the advisability of joining, or staying in, the R.I.C., but that said the R.I.C. manpower crisis happened before the more bloody phase of conflict from the summer of 1920 to the summer of 1921. Major action against the police included boycotting and the systematic burning of unoccupied police barracks.

[1] Another five Laois-native R.I.C. men were killed in 1920 – Michael Rafter, The Quiet County: Towards a History of the Laois Brigade IRA and Revolutionary Activity in the County 1913–1923 (Naas, 2016) 34. Additionally, John Poynton, an ex-R.I.C. man from Kilbride, Portarlington, was also killed in 1921 – but as a suspected informer.

[7] The full report can be read at the University of Warwick Digital Collections https://wdc.contentdm.oclc.org/digital/collection/easter/id/649/

[20] Seán William Gannon, ‘The Black and Tans and Auxiliaries – An Overview’, The Irish Story  https://www.theirishstory.com/2020/01/13/the-black-and-tans-and-auxiliaries-an-overview/#.YYKQpnrLdy1