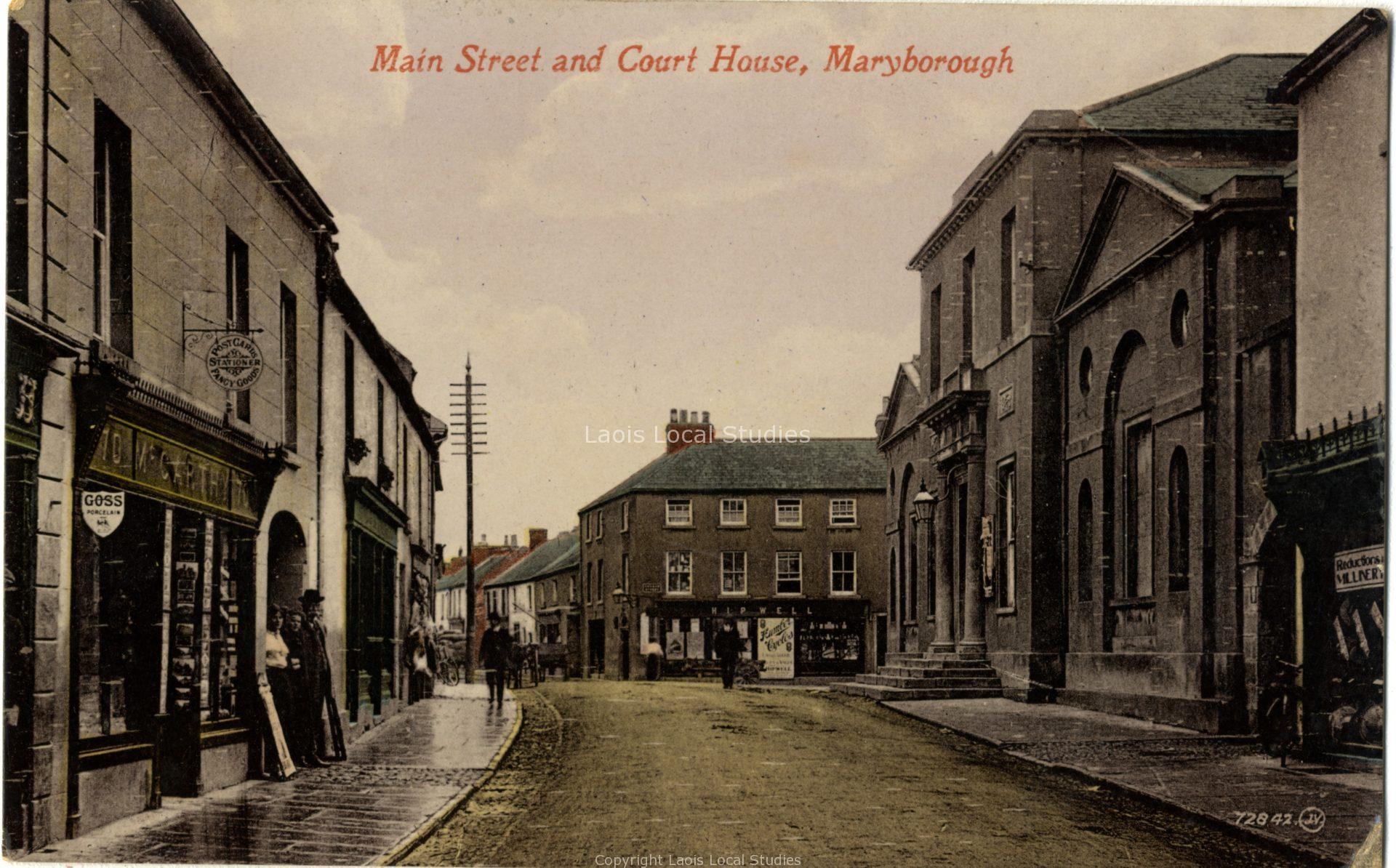 On January 26th 1922 Maryborough Courthouse resounded to cries of “Up the Republic” from the gallery as a self-described “Republican soldier” was taken from the dock denouncing “the informers of Ballinakill” as he went.[1] The prisoners were Peter Campion, John Campion and Alphonsus O’Hara. The charge was murder. Despite the defiant posturing this speech from the dock would not end up in the shining annals of patriotism.

In February 1925 the same three young Laois men were before the Central Criminal Court in Dublin over the same fatal incident as the court appearance in 1922. In passing sentence, the judge said “in ordinary circumstances the sentence would be penal servitude for life or a long term of imprisonment” but there were “very strong circumstances in favour of the prisoners which he had to take into account”.[2] They were sentenced to 12 months’ hard labour for the manslaughter of Geoffrey McDonald, who died of gunshot wounds on January 19th 1921. The accused had pled guilty.

The newspaper report from the 1921 inquest is full of pathos:

“Between 11 and 12 o’clock on Wednesday night, according to the unfortunate widow’s story, the family were in bed when she heard dogs barking in the lane, followed by the sound of feet coming quickly up the yard. The door was opened and a tall man who wore a mask and had his face blackened, rushed in, shone a’ flash lamp on the bed, caught her husband by the leg and arm, and dragged him on to the floor, without saying anything.

Her husband said, “Oh, my God, what is coming now”? He made no effort to get out merely raising his hands.

The man immediately got a gun from another man outside the door, and without putting it to his shoulder fired into her husband’s heart. He moaned, called “Jane” three times, and his hand dropped.”[3]

The killing took place in an “old outhouse” adjacent to the house of John McDonald, Geoffrey‘s brother. Within that one-roomed outhouse, or shed, resided Geoffrey, his wife Jane, and their five children, the eldest of whom was ten. In newspaper reports of the inquest and trials the location is given as Drimaterril, a townland in-between Abbeyleix and Ballinakill, but the census records no John McDonald in that townland, but rather one John McDonald, a shepherd, in the adjacent townland of Ballymullen. The Campions also lived in Ballymullen. Regardless of the precise address, the Campions and the McDonalds were neighbours — in other respects though their circumstances were very different.

The year before his death Geoffrey McDonald had applied for the tenancy of a vacant council cottage in Rathmoyle, an application to Abbeyleix Rural District Council.[4]  This may seem like an aside, but it tells us something of the McDonald’s situation. It also tells us of how reputation and patronage were important in the allocation of local resources, but also how they became less so under the impact of a widening franchise, the democratisation of local government, and the mobilisation of some of the working class into the Irish Transport and General Workers’ Union. In the contest for the house Geoffrey McDonald was barely an also-ran, his application received one proposer – Ballinakill shopkeeper Thomas Grace, and no seconder. The real competition was between Michael Loughman, of, according to the meeting chair, “a very respectable old family” and moreover a nephew of the former tenant, and John Bonham, whose application came in the form of a resolution from the local Transport Union branch. Bonham was successful, though the fact that he had earlier been promised housing by a local clergyman perhaps shows the limited extent of change.

On Trial Under the Crown

The 1925 trial was the second court visit Peter Campion, John Campion and Alphonsus O’Hara had undergone in connection with the killing of Geoffrey McDonald. On the 26th of January 1922 they had been charged with murder in Maryborough Courthouse under the United Kingdom system. It must have been one of the last court sittings in Laois under the old regime, possibly the last. Their case was to go to the Spring Assizes, but then the Spring Assizes were never going to happen.  The words of the accused comprised part of the evidence put forward by the British military and the Royal Irish Constabulary in January 1922.[5]

“We went to McDonald’s house on the 19th January 1921, to frighten him to confess about the burning of my father’s hay, and about other things he took. I was annoyed with Geoffrey McDonald for a long time. We had no intention of shooting him.”

Seemingly Alphonsus O’Hara had made his own confession, and the others did the same when confronted with O’Hara’s words.

O’Hara also said, according to this version:

“I had a lot of drink taken. I am quite willing to take my punishment. The matter has been troubling my conscience. I am extremely sorry for what has occurred.”

Doubtless the R.I.C. were at least as good as any other police force at making people confess what the R.I.C. wanted them to confess. That said O’Hara’s and the Campions’ words at the 1922 trial were less damning than they might have been and equally, as we shall see, less useful to the Crown authorities.

In the 1921 inquest into Geoffrey McDonald’s death another version of events was suggested.[6] Specifically, McDonald had been convicted on the 15th of August 1920 before a Sinn Féin or Dáil court for stealing horse harnesses. He was sentenced to exile, but, rather than accepting that, he hid out, with his children surreptitiously supplying him with food.  The implication is that it was the Republican Police visited the McDonald household on that fateful winter night in January 1921.

Jane McDonald, Geoffrey McDonald’s widow, did not identify the Campions at the time of the inquest. She later claimed she was afraid to do so. Rather she identified Alphonsus O’Hara, Myles Muldowney, and James Maher.[7] The 1921 inquest found that Geoffrey McDonald had been shot “at close range” and “with felonious intent” by Myles Muldowney. In 1922 Jane McDonald denied identifying anyone at that stage other than Muldowney, and justified herself in doing so by saying “he was carrying a double-barrelled gun around the place and threatening to shoot my husband”.[8] Of Maher, O’Hara and Muldowney she said “they were around the place as well as the others. They used a threat on my husband when they raided the place.”[9] But this appears to have been on an earlier occasion.

The Military Service Pensions Collection lists Myles Muldowney as part of the 3rd Battalion, Ballinakill Company, Laois Brigade, Irish Republican Army.[10] No James Maher is so listed, though a John Maher is. Alphonsus O’Hara is not listed, but an Alfred O’Hara is, which seems like a typing error. By the 1930s, if indeed it is the same person, O’Hara was in America.  Republican Police were Volunteers seconded from I.R.A. companies, so it seems that O’Hara could have been in that role.  But to my knowledge it was highly unusual for anyone to be put on trial in the Free State of the post-revolutionary period for political violence carried out in the revolutionary period. For instance amnesties covered both the victors and the defeated of the Civil War.[11]

There is only very sparse newspaper reporting on the 1925 trial, so without diving into the archives, where perhaps there might be greater information, it is hard to tell more of exactly what happened. Two facts stand out — those accused in 1925 received very light sentences and yet they were put on trial in the first place.  Put together these two facts suggest the killing of Geoffrey McDonald was something which happened in a grey zone between private quarrel and Republican policing. Without the former there would not have been a 1925 trial, without the latter it is difficult to understand why such small sentences for men, who, by their own admission, entered a man’s dwelling-place in the middle of the night and dragged him from his bed, before one fired a shotgun into the man’s prostrate body at point-blank range.

McDonalds and Campions — contrasts and connections

After the 1921 inquest Jane McDonald was secreted away up in the North of Ireland for her own safety.  Next to the straitened circumstances of the McDonalds can be added a transitory existence. Geoffrey had previously lived in Straffan, Co. Kildare, and in America. John McDonald appears in the 1911 census in Ballymullen, but not in 1901.  The fact that in some newspaper reports Geoffrey McDonald was misidentified as an ex-soldier speaks to his impoverished life.[12] It is quite the contrast with their neighbours the Campions, who lived in the palatial Ballymullen House, which, according to the census, had ten rooms, and sixteen “out-offices” – nine more than anyone else in the townland.[13] Back in the 1850s we can see the Campion holding in Griffiths Valuations – then it comprised 250 acres, and was valued at over £200, so the Campions were well within the farming elite.[14] Ominously their holding in the 1850s included two vacant sub-tenancies comprising houses and small gardens.  The property changed hands twice in more recent decades. In 2014 the house, and 126 acres of land, made €1.3 million at auction.[15] The description in the 1980s sale was of “about 300 acres, of which 230 acres would be good quality arable land and the remainder in need of drainage. A period house in need of repair.”[16]

So it would appear a social gulf separated the neighbouring families and the intervention of the Dáil court and the Republican police was to defend the propertied from the propertyless. But, astoundingly, the fact is the McDonalds and the Campions were connected by marriage. On the 3rd of September 1919 Ellen, daughter of John McDonald and niece of Geoffrey McDonald, married Michael Campion, the brother of Peter Campion and John Campion.[17] Michael Campion was the eldest Campion sibling, at least by the 1911 census. This must have been a love match, but doubtless it was a controversial one.  The relationship between Ellen and Michael opens up a whole other dimension to the antagonistic relationship between Geoffrey McDonald and the younger Campion brothers.