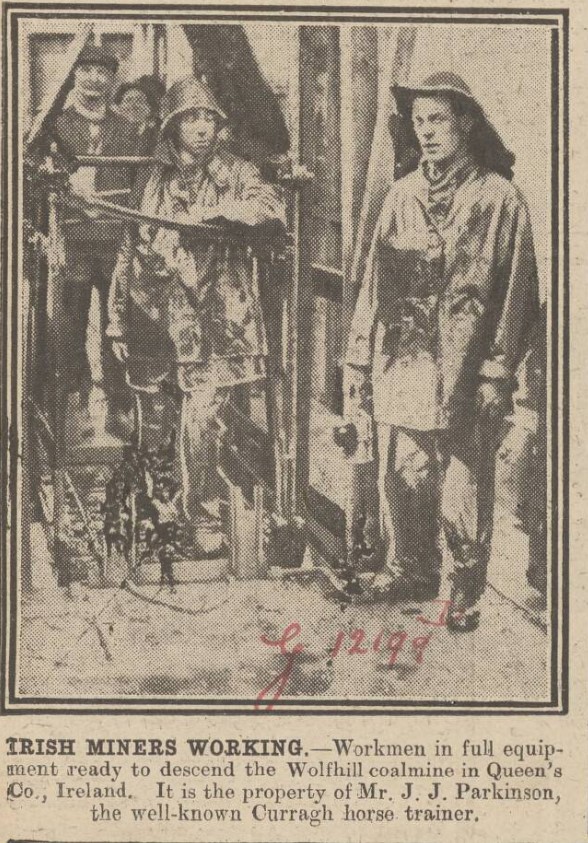 In 1921 the Wolfhill Collieries company was planning an extensive expansion and seeking investment funds through offering shares to the public.[1] Unfortunately, the company went into receivership in the summer of 1925.[2] So this phase of coal-mining in Wolfhill ran between 1910, when efforts to re-start began, and 1925, with receivership and eventual liquidation.[3] The company’s mines were at Gracefield and Modubeagh.  There is an earlier history of mining there – for instance the pit at Modubeagh had been abandoned in 1885 after a flood caused by a breakdown in the machinery that pumped water out of the mine. They started to try to free this mine of water in 1918. [4]

In 1913 John Redmond, leader of the Irish Parliamentary Party, visited the newly re-opened mines, with a group of ‘Home Rule’ M.P.s.[5] The development of the coal resource carried with it the hopes of new industrial development under an Irish Parliament.[6]  But between 1914 and Easter 1916 explosives from the mines were supplied to the Irish Volunteers,[7] that is the section of the nationalist militia that didn’t step behind Redmond in supporting the First World War. Clearly not everyone around the coalmines was following Redmond’s lead. The ‘Freeman’s Journal’ covering campaigning in the run-up to the 1918 election presented the image of a successful rally in Wolfhill in support of Irish Parliamentary Party candidate Patrick J. Meehan, but the paper was a solid supporter of the party so it is hard to know if that was the case.[8]

In the context of the First World War three new trainlines were constructed linking the coalmines of Castlecomer, Arigna and Wolfhill to the national rail network.[9] The Wolfhill line ran from Athy to Wolfhill via Ballylynan. While the line to the coalfield was closed down in the 1920s trains continued to run from Athy to Ballylynan to collect sugar beet from local farmers into the 1960s, while a spur added in the 1940s continued to serve the Asbestos factory in Athy till even later. The building of the railway involved an influx of temporary construction workers and short strikes – including one which was settled with clerical and political intervention.[10]

In 1920 a study of Irish coalfields written by Laurence J. Kettle claimed a shortage of labour and a shortage of suitable housing for workers in Wolfhill.[11] As he described it: “About 150 men and boys are employed. Scarcity of labour considerably handicaps development work. Housing accommodation is badly needed.” Housing for the workers there was something the Irish Transport and General Workers’ Union had been lobbying for the previous year.[12]

Also in that year the Dáil government, as part of its effort to establish alternative administrative structures for the country, initiated a Commission of Inquiry into the Resources and Industries of Ireland.[13] This effort was led by Darrell Figgis. In July 1921 the Commission published a ‘Memoir on the Coalfields of Ireland’. As with Home Rule and Redmond’s visit in 1913 the prospect of republican self-government was filled with the anticipation of new economic development.

More photos of the railway line at:

[2] Frank Taafe, Eye on the Past blog, ‘The Athy Wolfhill Railway Line (2)’,  http://athyeyeonthepast.blogspot.com/2017/02/the-athy-wolfhill-railway-line-2.html